The story of Gal Oya Lodge began in 2010 when Tim moved to Sri Lanka to open a beach resort on the west coast.

His family owned one of the most prestigious lodges in Nepal and he was interested in branching out to Sri Lanka. He met John Balmond there and they decided that they would like to work together on a project in Sri Lanka. John is the son of Cecil Balmond – a world-renowned British Sri Lankan architect who has designed a host of iconic buildings around the world, including the London Olympic Orbit Tower and the National Taichung Theatre. Tim also introduced John to his friend Sangjay, who had spent many years working in the luxury tourism industry. They had known each other since childhood and had fond memories of the time they spent together in Tim’s family lodge in Nepal. The three of them combined to make the perfect team – John’s architectural expertise guaranteed that they would build a unique and interesting structure, Sangjay’s background in luxury travel meant that the lodge would give the guests an exceptional experience and Tim’s knowledge of wildlife tourism would allow them to offer guests the chance to see the majestic creatures that live in Sri Lanka. 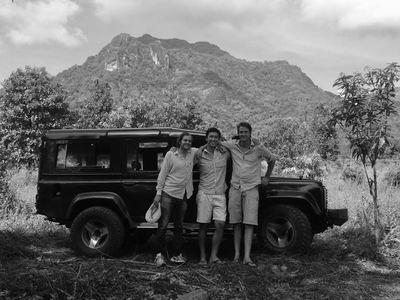 They travelled to Sri Lanka together in 2012 and began exploring its many national parks – looking for the perfect setting for their lodge. The trio firmly believed that the lodge should be in a remote part of Sri Lanka – there were lots of wildlife lodges in the Yala and Wilpattu national parks, offering conventional safari experiences. They wanted to give guests something different and more authentic. Thus, they decided that their new lodge should focus on the Gal Oya National Park – an unspoiled national park that isn’t visited by hordes of tourists each year.

They quickly bought a plot of land, just outside Gal Oya and began designing the perfect wildlife hideaway. The Gal Oya Lodge would be the first lodge in the area, and they were keen to connect with the local community and assuage any fears that they might have. This was especially important for the Vedda community, who were concerned about the potential impact that the lodge might have on them. However, the team spent a lot of time with them and demonstrated the positive impact that the lodge could have on the area. They wanted visitors to have an authentic experience of Sri Lanka and its wildlife and understood how important the local community is.

The desire for authenticity also informed their recommended safari experience. Unlike many safaris, where you see semi-domesticated animals that are very used to human interaction, the Gal Oya Safari is about as authentic as it gets. The animals are shy, and you could spend a day exploring the jungle and see very little or you could get very lucky and see a wild animal doing what a wild animal does. It’s not a ‘list-based safari’ that you go on to boast about seeing the ‘big 5’, rather it’s a genuine opportunity for wildlife lovers to see something in a unique, remote and experimental place. Gal Oya Lodge also offers a variety of other experiences, including the chance to walk through the jungle with a local translator and the Chief of the Vedda community – where he will explain how the Veddas use the local flora and fauna, alongside hunting techniques and survival skills. This is something that would likely be impossible, without the tight bonds that the owners have developed with the local community. This also extends to the staff, who generally live within a 10-minute walk of the lodge. Allowing visitors to draw on their vast local knowledge and genuine love of Gal Oya.

Tim, John and Sangjay have imbued the Gal Oya Lodge with a philosophy of authenticity – offering an experimental experience in a remote and unique setting. If you want to see some majestic Sri Lankan wildlife in an unspoiled paradise, then Gal Oya Lodge is ideal.