It takes a real visionary to re-imagine something that has been part of the landscape for as long as you can recall… and then to make it better. Perched 2112 metres above sea level is the iconic Chetzeron; a striking fort-like landmark in the beautiful Crans-Montana region, and once a 1960’s cable car station in its former incarnation.

Lured by its unique location, positive energy and spectacular 360° views of the Alps, local hotelier and visionary, Sami Lamaa, was transfixed when he learnt of the station’s closure in 2003,

“The building’s location is amazing, so I began to look at it in a new way. In fact, I couldn’t stop looking at it. Finally, I bought it!”

The idea was to create a space for the seasoned traveller. For the type of discerning clientèle that had already seen and done a lot. The type of clientèle looking to be impressed, constantly in search of the extraordinary. Teaming up with fellow Crans-Montana lover, Louis Bégault, in 2004, and their respective wives, Napa and Christine, Sami rolled up his sleeves and took on the challenge. The collaboration known as ‘Project Genesis’ was born.

Back in the day skiers in Switzerland were accustomed to eating chips or hot dogs on the slopes… so naturally ex chef Lamaa’s next thought was, “Why don’t we do a great restaurant on top of the mountain? Gourmet on the slopes!”

They were pioneers in Switzerland. Once applications to transform the structure into a restaurant were accepted, architect Ambroise Bonvin, of the Lausanne-based Actes Collectifs Architectes, was commissioned to undertake this exciting project. The objectives were simple, albeit lofty. To create a space of undisputed luxury. To capture the beauty of genuine silence, all encapsulated within the finest architecture and design imaginable. Work eventually began in December 2008, despite adverse weather conditions, but where there’s a will, there’s a way and Sami and his team made sure they found it. Exactly one year later, the sky-high restaurant welcomed its first privileged guests.

Phase two was the creation of the hotel itself. With a building permit issued in 2012, the major works began soon after and eventually the property as we know it today, began to take shape. Little by little the lobby, dining room, smoking room and seminar room came to be, with the hotel’s signature bay window, installed in May 2014. Incredibly, the doors to this very special hotel opened just seven months later. But the project didn’t end there. Sami and his team continued to upgrade this Alpine retreat, adding the not-to-be-missed rooftop pool, sauna and Hamman. By 2015 the Chetzeron had become a veritable finalist for the “European hotel design awards” and has unsurprisingly clocked up more prestigious accolades and awards ever since. 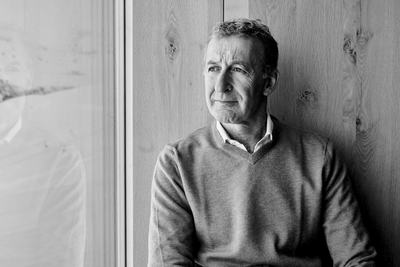 As the ultimate ski in/ski out destination, only accessible by foot, ski, or snowmobile, with spectacular views over the Rhone Valley, from Matterhorn to Mont Blanc, The Chetzeron is a destination not to be missed. From its innovative concept, to the indulgent wellness area ready to take you on a journey of pure relaxation, the real show stopper is perhaps the hotel’s restaurant itself, and where it all began. Sami, of Lebanese heritage, who had worked as a chef for his father after hotel school, wanted to create dishes that were authentic and reminded his guests of their childhood,

“Wow, that is the hummus I had as a kid! It’s the way my grandmother made it.” So at Chetzeron I said to my chef, “Let’s do the same thing with Swiss Alpine food. Let’s tap into people’s memories.”

What started out as an abandoned cable car station, is today a monumental sanctuary, dedicated to silence and tranquillity, and continually striving for excellence. But what else would you expect from the man who has literally lived in hotels since the day he was born. If anyone knows how to create magic for his guests, it’s Sami Lamma,

“A lot of hotels promote their properties as being like a home, but for me it is not a concept; it is reality. Thus, the experiences here are very authentic. I welcome people not as guests but as friends.”

And good friendships, like memories, can last a lifetime.