18 Micon’s story begins when two colleagues were enjoying a quiet meal at the historic Oineas Tavern in the heart of Psirri. The first, Minas Terlidis, had just returned home after eight years abroad, while the second, George Tsoukalas was a respected engineer with more than thirty years of experience in Greece. As the pair were eating, they became captivated by an abandoned warehouse – a symbol of decline in the once flourishing working-class neighbourhood that would metamorphosize into a testament to its rejuvenation. It’s impossible to understand 18 Micon without understanding Psirri – an authentically Athenian working-class neighbourhood that is just a stone’s throw away from the iconic tourist zone of Plaka. Despite the two’s closeness, they couldn’t have been more different in appearance – with the stately neoclassical homes of Plaka providing a stark contrast to the earthy authenticity of Psirri. This meant that the latter had been maligned for much of its history, until recent years, which had transformed it into a dynamic art hub, brimming with creative young artists and traditional craftsmen. It’s fitting that Psirri has become the centre of the revolution against Greece’s current economic woes because it was also at the heart of the revolution against the Ottoman occupation two centuries ago and the place that Lord Byron chose to live during his ill-fated time in Greece. Minas and George were so inspired by the neighbourhood’s story and the abandoned warehouse that they sought to create a stunning boutique hotel that would redefine the concept of Athenian hospitality. The pair were keen to accentuate the history of the building, which was once the warehouse of Mr. Kostas, one of the first tool traders in Athens. They were also inspired by the area’s links to Micon, an important painter and sculptor in fifth-century Athens, leading them to base their design around the fundamental elements of construction – brick, wood and cement.

18 Micon’s design and ambience is a testament to this vision – a restored industrial building that is firmly grounded in the past and totally in keeping with the working-class roots of the neighbourhood that also looks towards its bright future. It is the kind of place where travellers can fan the flames of their wanderlust and understand what authentic Athenian life is really like. Each room is unique, providing a slightly different take on the overall theme, utilising locally hand-crafted furniture to create a personal experience. 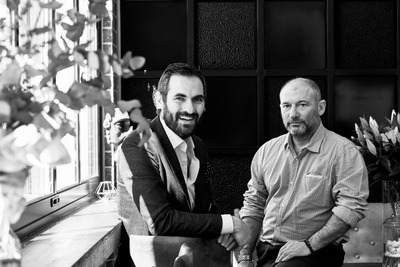 Both Minas and George had travelled extensively, which informed the kind of experience that they wanted to offer their guests. They understood that great hotels are confident about their roots – allowing guests to understand what local hospitality is really like. Luckily, hospitality is firmly embedded in Greek culture and this informs every way in which the hotel operates. From welcoming staff to a communal breakfast, where guests sit shoulder to shoulder at large tables – it is exactly what you would expect from a working-class Greek home. 18 Micon has been a resounding success – delighting guests from around the world, gracing the pages of world-renowned publications and winning a series of prestigious industry awards. The secret to its success is simple – it epitomises everything that makes Athens so great. Set in Psirri it is steeped in Athens’ rich history and oozes the creative spirit of the birthplace of philosophy and democracy. Yet, it also has an eye turned to the future – offering an authentic taste of Athenian life for generations to come. Born out of a chance meal between Minas and George, 18 Micon Str.’s story is only just beginning, but it looks set to revolutionise travel and hospitality in the same way that Athens has revolutionised other concepts in the past.