Set amongst the olive groves of Massa Lubrense, discover a hidden oasis by the name of Art Hotel Villa Fiorella.

Occupying one of the most desired spots along the Sorrento peninsula, Villa Fiorella sits on the front line to the sea, enjoying some of the most magical sunsets and views over the island of Capri. 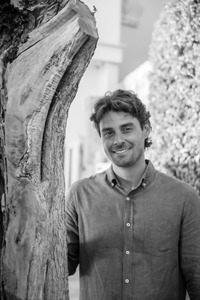 This third generation-run hotel is now in the capable hands of Alberto Colonna, who was practically raised at his grandfather’s hotel, Art Hotel Gran Paradiso, a property that remains part of their hotel group today. Alberto fondly recalls how his grandfather, Antonino, would take him to the market as a young child, to buy fresh fruit and vegetables, and introduce him to all the hotel’s suppliers. Sharing many wonderful memories of those early days, he was later inspired to follow in his footsteps. At nineteen, Alberto studied hospitality at the esteemed Glion Hotel School in Switzerland, and during his studies, worked as a waiter at Hotel de la Paix in Geneva and then as a personal butler at The Ritz Carlton Hotel Arts. This experience proved invaluable. When Antonino was eighty-two, and became too old to manage the Gran Paradiso, Alberto returned from Spain and took over, at only 25.

Villa Fiorella has always been a special place in Massa Lubrense, mainly due to its outstanding setting, and also because Antonino had always encouraged his son and grandson to obtain it. With the back exterior of the hotel dating back to the 1800s and the front to 1962, Villa Fiorella was old and cramped and crying out for some TLC. Requiring sacrifices and a lot of work, the father and son duo transformed the property into the luxury boutique hotel it is today, with 2020 having marked four years since its opening.

The philosophy behind this successful property is two-fold. To provide a haven of beauty and tranquility, unrivalled in much of the overcrowded parts of the Amalfi Coast. Each of the 23 modern suites enjoys access to 4000 Sq m of beautiful private grounds and gardens. Secondly, it is an art hotel. As an avid collector, Mario shares his many pieces with his guests, which are tastefully showcased throughout the hotel. As Alberto would put it,

“This makes the hotel more than just a place to stay; it gives it soul.”

Alberto makes it his mission to constantly provide the highest standards to his ever-discerning guests, and this standard was recognised when they won the Traveller Choice Award from TripAdvisor in 2018.

Whether it’s the breathtaking views from the infinity pool or the delicious local dishes served at the restaurant Terrazza Fiorella, or simply the warm hospitality from Alberto himself, you’ll never be disappointed by the jewel of Massa Lubrense. Come for a visit, stay for a long while.