The story of Casale San Pietro begins more than thirty years ago in Yorkshire, when a budding young hairdresser named Joe cut the hair of an aspiring businesswoman called Alana. They were just nineteen at the time, both with big plans for the future. Alana moved to the Caribbean - spending her youth exploring unspoiled tropical paradises before returning home to the UK where she reconnected with Joe, twelve years on. One thing led to another and the couple were soon happily married with children.

Following this, Joe followed his own path to success, leaving school at fifteen to open his own hair salon. The business went from strength to strength and he had a total of three by the time the couple decided to move onto new pastures. Alana pursued a long and successful career in retail – starting as the youngest store manager that Mothercare had ever recruited, before becoming an area manager at Burton and finishing as the retail director at Hobbs.

During this period, Joe and Alana would spend what leisure time they had in Italy – falling in love with the region of Lazio, where they eventually purchased their apartment in Fiuggi. However, they always found it difficult to spend much time there - due to Joe’s commitments at the salon and Alana’s commitments at work. Eventually, in August 2014, while on holiday in Lazio, they had a long conversation about their lives, and they agreed that they were tired of the status quo. Alana was no longer prepared to start at 5am and finish at 9pm, while Joe was no longer prepared to spend more than fifty hours on his feet every week.

They both felt that they needed a new challenge and decided to abandon their former careers, to open a boutique hotel in the heart of the Roman countryside. One of their favourite restaurants in the area had been put up for sale - an idyllic restored farmhouse. From there, things fell into place quickly – they already knew the owners of the Casale San Pietro and had celebrated a few special occasions there. Fortunately, the owners Marco and Luiga were keen to sell – so, Joe and Alana purchased Casale San Pietro and set about turning the sleepy taverna into a boutique hideaway.

Despite the differences in their previous careers, both Joe and Alana shared an intense passion for delivering the best service possible and this informed the philosophy of Casale San Pietro, that still reigns triumphant today. They had spent thirty years looking after other people and making them happy and had no plans to change their formula. They wanted to make Casale San Pietro an oasis of luxury – surrounded by unspoiled nature and remote adventures in the rolling Italian countryside.

This mission began with a loving restoration that shaped Casale San Pietro into the perfect blend of modernity and tradition. Its infrastructure was revamped – adding all the contemporary touches that the modern traveller needs to make the most out of their time away, adding a refreshing swimming pool where guests could bake in the hot summer sun. Keen to retain its rustic Roman feel, they kept the idyllic, olive grove laden grounds untouched. The bountiful olives from these trees are pressed into fresh, golden olive oil and they also grow local vegetables in the garden, which are used to create mouth-watering Italian cuisine.

The Casale’s location in Lazio is one of Italy’s most overlooked regions, offering incredible travel experiences throughout the year. Rome is just forty minutes away – allowing guests to explore the majestic history of the eternal city. The sapphire waters of the Mediterranean are also close, and visitors can ski in the nearby mountains. 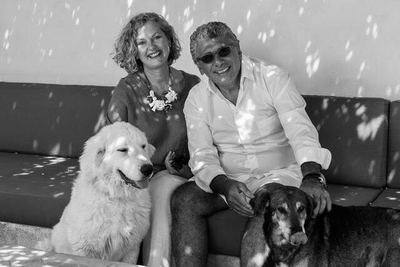 Joe and Alana opened the doors to Casale San Pietro in 2016 – offering a unique travel experience in the heart of the Roman countryside. Since then Casale San Pietro has gone from strength to strength, garnering exceptional reviews from guests across the globe. Its blend of charming, rural Italian life with contemporary luxury travel is ideal for explorers who value authenticity. An escape from the modern world that remains very much connected to it – a serene haven or the ideal place for an adventure. Whatever kind of travel experience you desire – Joe and Alana’s commitment to exceptional service ensures that Casale San Pietro can and will provide it.