It has been said, “All of our dreams can come true if we have the courage to pursue them.”

The Risatti family set about making their dream a reality back in 1952 when brothers Vincenzo and Italo ventured upon their first hotel, the Panorama, set in the picturesque town of Limone sul Garda. At the time, the number of hotels on Italy’s largest lake could barely be counted on the fingers of one hand, yet thanks to their ingenuity and foresight, it wasn’t long before guests were flocking to experience the breathtaking panoramas such exclusive properties had to offer.

The superb Splendid Palace, also overlooking Lake Garda in this stunning northern region of Lombardy, became their second hotel to open its doors, just eight years later. Vincenzo’s wife, and rock, Fausta, became an integral part of the process, providing unwavering support in the management of the hotels, and perhaps even more importantly, in raising their four children to fully understand the workings of the hotel industry; instilling that same level of excellence from an early age. This dedication paid off handsomely in 1993, when two other premium hotels, the elegant seventeenth-century Le Palme and La Pergola, were added to the growing family empire — this time in the capable hands of their children, Gianfranco, Rosanna, Mariagrazia and Fabrizio. 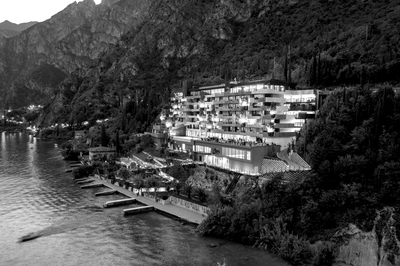 In 2006, the hotel Don Pedro was acquired, set in the fairy-tale commune of Malcesine; which was fully restored and re-opened under the new name of Majestic Palace. It is testimony to the tenacious work and passion of the Risatti family that they’ve earned the successes they enjoy today. Through relentless upgrades and updates, and dedication to excellence, their hotels not only provide the highest possible standards, perfectly aligned with the times, but are leading the way. In the realisation of their dreams, the Risatti family have created a legacy that has quite literally placed Limone sul Garda on the map. Today, this beautiful lakeside village, famous for its lemon groves, fine olive oil, and the longevity of its inhabitants, draws in the second-highest number of tourists in Italy per capita, thanks to a dream that began almost sixty years ago.

If all of this weren’t impressive enough, the family began a new project five years ago, taking them back to where it all began. Vincenzo’s children and grandchildren decided to take the original Panorama Hotel and transform it into one of the most outstanding five-star luxury hotels the lake has even seen. Building upon the foundation and structure of the Panorama, they completely refurbished the property, whilst retaining its original architecture and design to ensure perfect integration with the surrounding landscape. By using the most advanced geothermal technologies, they were able to create a fully zero-emissions hotel, proving that even luxury can be eco-friendly and that it should never come at the expense of our planet. That hotel today is EALA My Lakeside Dream, whose name derives from Celtic culture, represented by the swan. According to mythology, the Eala provides the ability to interpret dreams and became a source of inspiration to this great family who were able to give shape to their dream of bringing excellence to one of the most beautiful places on Earth.

“The dream is for our guests to experience this paradise in an elegant and exclusive environment.”

The EALA is five-star luxury in every way, shape and form. Aimed at adults, this masterpiece of a hotel offers guests everything they could ask for and more — from the spectacular panoramic vistas of the lake to a 1500m2 spa with an outdoor infinity pool and two exceptional restaurants with Michelin starred chef, Alfio Ghezzi Bistrot at the helm. You may think you’re dreaming, but a stay at EALA My Lakeside Dream means you don’t have to.