Growing up in a family of hoteliers, Ulrike Spögler was surrounded by the inner workings of the industry from a young age, and worked in various roles within her family’s business right from when she was a young girl. Despite growing up within the industry however, Ulrike did not initially want to follow in her family’s footsteps and instead studied veterinary medicine in Vienna. Although, after a while she found it to be a lonely endeavour and eventually decided to switch to hotel management school in Tegernsee.

Ulrike studied for two years in Switzerland and for one season in Capri, adding to all the knowledge passed on by her parents, before finally returning to join her family as a hotelier herself. Upon her return, Ulrike and her father fulfilled a lifelong dream of his and took over the Hotel Jagdhof in Marling, in the stunning region of Merano, and began to make it their own. Sadly, Ulrike’s father passed away prematurely, leaving Ulrike to run the business alone. Taking it in her stride, Ulrike took full responsibility for the business and began to put her own unique stamp on the hotel, whilst remaining continuously inspired by her father and his dreams for their partnership.

Three years after her father’s passing, Ulrike married Florian in 1994, a fellow hotelier with a property in a nearby village. Together they worked as a team to renovate sections of the hotel, even throughout starting a family together with their two lovely daughters Julia and Anna. Despite Florian’s constant support and partnership, Ulrike never shared management of the hotel, for she simply loves her job too much to give any part of it up! After the last major renovations five years ago, the hotel was finally renamed Giardino Marling, and continues to shine amongst Italy's Dolomite mountains.

During the renovations, every decision followed Ulrike’s directives and creative plans for the hotel, and the level of personal touches throughout Giardino Marling is what makes it so incredibly special. Ulrike wanted to create a space full of light and tranquility that doesn’t intrude on the surrounding landscapes, but instead uses them to inspire the spaces and designs within the hotel itself. Bright open spaces, warm earthy tones and fresh bouquets of flowers are entwined with the modern, luxurious finishings, to bring the outside in and to create an environment in which Ulrike’s guests can relax, unwind and experience true mindfulness. 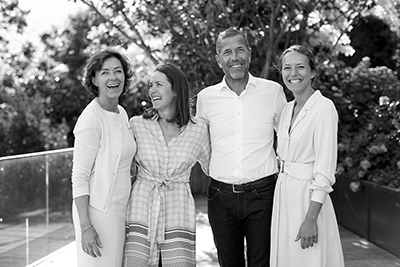 Ulrike’s hope for her guests’ experience is what has created the spirit of Giardino Marling - “everyone is allowed to be who and how they are.” She tends to each and every single guest personally, with the thoughtfulness and openness of an old friend welcoming them into their home, so that they know they are free to be themselves in their most authentic way. Creating a space in which guests can stop and take a breath, recharge their batteries and their spirit, is something very close to Ulrike’s heart, and something that she has undeniably succeeded with.

Ulrike has equipped her hotel with a yoga and fitness area, relaxation room, access to experienced trainers, an extraordinary spa complete with saunas, treatments and stunning views, and thoughtfully placed statements of intent for the occasional reminder, in case her guests are forgetting that they are free to be exactly who they are. Light and water dance around each other throughout this hotel, their placement and purpose designed by Ulrike to enhance the soul-soothing experience of each and every guest. Floor to ceiling windows, guest room verandas, stunning terraces with panoramic views of the surrounding countryside, and multiple swimming pools (one an adults only rooftop extraordinaire complete with sun terrace amongst the clouds) have all been woven together to reflect Ulrike’s own desire for inner balance, tranquility and the impression of which she hopes to leave guests with, after their stay in this incredible place.

Ulrike’s passion for what she does is unmistakable, the strength of it built from her early experiences during which she absorbed the passions of her family, and especially that of her father. Despite losing him early on in the process of making this hotel what it is today, Ulrike’s love for her family shines through in an incredibly special and unique way, as she continues to invite people to be a part of it during their time at the brilliant Giardino Marling.