It is said that faith is taking the first step even when you don’t see the whole mountain. Oftentimes, seeing the magnitude of the challenge before us, means we quit before we’ve even begun. But sometimes there’s an undeniable knowing within us, an inexplicable tug at our heart and soul, that drives us to seek a certain path, however uncertain. A perception, that whatever bumps may lay ahead, it will all be worth it.

Set in the picture postcard region of Mougins, on the French Riviera, there sits a stately manor house that was once home to an English lord. Built at the end of the 19th century, Le Manoir de L’Etang is a property with a rich and artistic past, located in the same medieval commune that was to be Picasso’s final resting place, inspiring his landscape, Mougins. Surrounded by lush rolling hills and ancient homes, it’s not hard to appreciate the sublime beauty that has provided both a haven and inspiration to many artists over the years.

Between 1929 to 1940, a lady called Elisabeth Buzzard lived at Le Manoir. Her father had lost most of his wealth during the Great Depression, but was fortunate enough to be invited to stay at this splendid residence, rent-free, enjoying many hours lovingly painting the manicured gardens. Elisabeth’s years at Le Manoir were filled with fond and happy memories, as she looked back at her friendship with Rosella Hightower, a famous prima ballerina, and recalled Rudyard Kipling, who famously wrote ‘The Jungle Book’, once visiting their home too.

By the early 1950’s Maurice Gridaine, an acclaimed architect from Paris, fell in love with Le Manoir, and was to spend the next 30 years of his life restoring it. His passion piece would later set the stage for cinematic audiences when his daughter Monique’s brother-in-law, Philippe Labro, directed a few films there. Maurice, who also built the old Palais de festival on the Croisette, sadly passed away by the end of the restoration, however, Monique decided that she would keep the place alive by converting it into a hotel. In doing so she was also able to allow her mother, who lived until she was 99, to die there as well.

As you enter the doors of this elegant property, the ambience that greets you at once invokes a feeling of peace, and contentment, a mélange of all the colourful stories that took place within its beautiful stone walls. Overlooking a lake, covered in the most gorgeous lotus flowers, everything about Le Manoir breathes serenity. One can only imagine how wonderful it must have been to grow up there. When Camilla Richards, who owns the property today, first laid eyes on it, Le Manoir immediately captured her heart too.

Pregnant with her second son, Camilla met Monique in 2003. Tired of the rat race in London, the constant hustle, the commutes, and the heavy pollution, Camilla and her husband decided it was time to leave behind their careers in finance and consulting, and embark on a much-needed life change; one that would provide their growing family with a healthier, and slower lifestyle, closer to nature. Camila instinctively knew Le Manoir had to be hers; acquiring it, however, was a whole other story. It took Ms Richards four months of visiting Monique to try and convince her to sell it to them, over all of the other bidders. 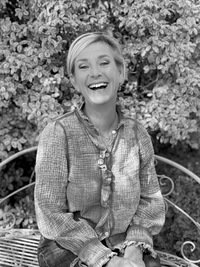 But it was destined to be, and after the summer of 2003 Monique conceded in selling. What followed was an intense and extensive renovation transforming the manor into the stunning hotel it is today, opening its doors in April 2004.
Today Le Manoir de L’Etang offers 22 beautifully appointed rooms, each boasting dreamy vistas over the lake and surrounding countryside. The décor is rustic elegance, with no two rooms styled the same. There are beamed ceilings and decadent dining experiences. The outdoor pool beckons guests to a refreshing dip, whilst sumptuous Egyptian cotton linen promises the dreamiest sleep. Guests now have the privilege of experiencing the same hospitality enjoyed by all of its previous owners.

Many years later Camilla was to hear from Elizabeth again who wanted nothing more than to return to her beloved home one last time, but sadly the trip was too long and she passed away in the French Isles in March of 2017, at the age of 90. The sounds of her laughter, and her joyful life at the manor, will forever be a part of its history.

Today Camilla carries on creating memories at this beautiful home. She learnt the art of managing a hotel, personnel, and looking after her valued guests whilst raising her two sons, as a single mother. Life is rarely easy, but sometimes we find ourselves on a path that, despite the bumps along the way, ultimately provides us with a joy we will never forget.

When asked about conquering her own mountain, Camilla will tell you.

I say to my clients, “Ignorance is bliss.” I am very happy that I had no idea what I was getting myself into as if I had known, I would never have embarked on this journey. Now I am no longer afraid of anything.