At a time when everything in life seems to be speeding up, nothing could be more therapeutic than hitting pause and allowing yourself the opportunity to unwind. Nestled amongst twenty-five acres of lavender fields and oversized cottonwood trees, Los Poblanos Historic Inn & Organic Farm provides exactly the type of relaxing backdrop to do just that.

Dating back to the 1920s, this idyllic New Mexican farm is literally a breath of fresh and delightfully fragrant air for those wanting to truly disconnect. With 50 rustic-style guest rooms, a field-to-fork restaurant and organic farm, Los Poblanos is the perfect spot to head to when you want to escape it all. So much so, that this family-run business has quickly established itself as the ‘destination du jour’ for those in the know; attracting celebrities and journalists from far and wide. 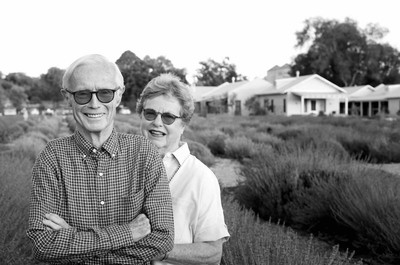 One unmistakable quality of this Albuquerque gem is that both history and community are so completely intermingled, that it’s hard to distinguish them apart. However, none of this would be possible without the tireless efforts of co-founder and matriarch, Penny Rembe.

Penny’s love affair with Los Poblanos first began in 1976, when Penny, along with her husband Armin, acquired one half of the property from its previous owners, Albert and Barbara Simms. Whilst the upkeep of such a large property proved to be incredibly challenging, Mr and Mrs Rembe were ready to roll up their sleeves and tackle what had to be done, head on, at first, working as gentlemen farmers on the land. When the other half of the property went up for sale in 1999, including La Quinta Cultural Center (set up for the benefit of the Albuquerque community), the Rembe’s stepped in again to reunite both properties and save them from commercial development, undertaking a preservation plan to safeguard their future. From day one, Penny and her husband worked tirelessly to maintain this slice of history, and in doing so, instilled a strong work ethic in their children, who were raised on the farm, assigning them daily chores to assist with the mountain of work involved. Needless to say, this tradition has continued to this very day and you’ll often find one of Penny’s grandchildren helping out around the property — be that driving a tractor, weeding the gardens or hand wrapping lavender soap.

It’s impossible to talk about Los Poblanos without talking about lavender. If the view of rolling purple fields isn't enough to transport you to a haven of calm, any one of their exceptional line of apothecary products just might do the trick. Since the first lavender plants were planted in 1999, the crop now yields around five gallons of pure essential oil each harvest, the countless properties of which are put into each and every one of their soothing aromatic products, sold at the farm, as well as internationally. But none of this would have been possible without Penny’s drive and steely determination to retain the heritage of Los Poblanos. Not only are each of these small-batch products distinctly artisanal, but they also carry with them the rich story of this historic retreat.

Los Poblanos has been in the hands of three generations of the Rembe Family for almost four decades. Penny and Armin continued to run the Inn for five years into their retirement but it is their son, Matthew, who, as Executive Director since 2004, now develops all areas of the business. Penny has never lost her connection with this very special place, and to this day can still be found somewhere on-site, whether that’s tending to the gardens or overseeing one of the many projects underway. Her favorite spot? Quite possibly the historic Rose Greely Garden. When her and Armin first moved in, they came across plans to grow and preserve heirloom roses, and Penny has worked lovingly over the years to fulfil these plans, with over thirty beautiful varieties growing there today.

There are so many reasons to visit Los Poblanos - you only need one. Sheer escapism to a place where time has truly stood still in timeless preservation.