There are retreats, and then there are magical havens that literally soothe your mind, body and soul. Four hours from Delhi, set within the Tehla region of India, lies a peaceful sanctuary, otherwise known as UTSAV Camp Sariska. Beautifully framed by the Aravalli hills, the oldest range of Fold mountains in the country, this generative retreat is also the most heavenly glamping experience you could imagine. Close to Rajasthan’s Sariska Tiger Reserve, Utsav has been masterfully created to provide the ultimate restorative destination, fully immersed in the natural world. 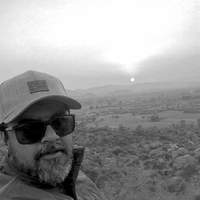 Trained naturalist, Luv Shekhawat, is the brains behind the operation. With over twenty years of experience in hospitality management, Luv’s mission was clear – to create a place where people could come to find peace and rejuvenate their spirit, through the healing power of nature.

It was the majesty of the boulders that first captivated Luv, enkindling the most exquisite sense of peace within his heart. So when the opportunity presented itself in 2011 to purchase land in the area, he jumped on it. Whilst the land was mostly barren at the time, Luv recognised its potential, visualizing how it could be, and ultimately manifesting his dream into reality. Over the next four years, under the guidance of his grandfather, Shekhawat gave every ounce of himself to cultivating the land. Sadly, many of the trees and plants that were planted, didn’t survive, which meant there had to be many trips between Jaipur and Tehla to fully develop the property. Some might say it was Luv’s persistence, others the blessings of the boulders, but most likely it was a combination of the two that gave birth to the immersive nature camp that exists today.

“When I was conceptualising the space for UTSAV, one of the most important points was not to disturb the trees. I had to build around the trees and that’s why sometimes you’ll find one seemingly growing out of nowhere!” Luv’s passion for nature, and the environment is plain to see. Embracing a philosophy of mindful consumption, this eco-camp aims not only to support the surrounding natural habitat but also to enable a thriving local ecosystem, whilst supporting local families. Over 85% of the team working at Utsav are from Tehla and nearby villages.

The menu follows a strict zero-mile approach, using only the freshest, pesticide and chemical-free ingredients, all grown from their own garden. Every effort has been made to ensure a minimum carbon footprint, from outlawing plastic bottles to composting biodegradable waste, along with thirty-four KW solar panels that reduce energy consumption by over 200 tons of carbon dioxide emissions per year. Even the hundreds of indigenous trees that have been planted don’t require extra water or care, given their suitability to the harsh Rajasthan summers. Instead they help maintain the ground water at healthy levels. Rest assured, every effort has been made to ensure both the land and the people that work within it, are protected and given every opportunity to flourish.

From charming stone cabins that feature floor to ceiling windows to panoramic vistas across this spectacular landscape, UTSAV Camp is your own personal oasis. Perfectly nestled by the Sariska National Park, which boasts twenty two members of the Tiger family, alongside panthers, deer and hyenas, this is ever nature lover’s paradise. If you’re living a fast-based urban life, chances are you’re in need of a total reset. So why not take a break from the constant scrolling and reconnect with the original source, Mother Nature herself, and emerge deeply rested, relaxed and in touch with our natural world.

“I’ve travelled to many destinations, but UTSAV Camp is still my favourite place to be. I hope you’ll fall in love with it as much as I have.” ~ Luv Shekhawat