A person who is able to transform dreams into reality is called a visionary. Antonino Cappiello, a Sorrento-born entrepreneur, fits this definition in full. His life has been marked by daring ambition, an indefatigable work ethic and a dedication to excellence. Starting off as a young hotel elevator bellboy, he gradually worked his way to the top of Italy’s toy industry, achieving significant success. In 2003 he crowned a lifelong dream by purchasing a 1970s Bed & Breakfast on the Costiera Amalfitana, with the aim of transforming it into a leading boutique hotel. With the help of futurist architect Gennaro Fusco, he entirely renovated the building over the next one and a half years, finally opening its doors in June 2005. Casa Angelina rapidly established itself as a minimalist luxury gem. Upon arriving, visitors are immediately stunned by the raw and untamed beauty of its natural setting. Located in the charming Praiano, a village of fishermen originally founded by the ancient Greeks, it clings to a steep cliff nestled among Mediterranean pines.

The vicinity to Positano and Amalfi is palpable - the inebriating aroma of lemon trees permeates the air as the sheer splendour of the Golfo di Salerno captures the eyes. There is an emotional connotation to the name Casa Angelina. Casa is the Italian word for “home”, while Angelina was Antonino’s late mother. The logo of the hotel itself, a stylised signature, is inspired by her handwriting. Casa Angelina stands both as a tribute to Antonino’s roots and as a home away from home for its distinguished guests. His vision for Casa Angelina took inspiration from the luxury retreats he had visited in Southeast Asia and Mexico’s sun-drenched Baja California region. The simple and sharp lines of the “white on white” interiors, designed by Marco De Luca, cocoon guests as they savour mesmerising views of the sapphire sea and the rugged profile of Caprion the horizon. The Philippe Starck-designed lamps, glass-works from the masters of Murano, and eccentric creations of Cuban artist Alfredo Sosabravo, perfectly complement this simplicity with a touch of chromatic flair. 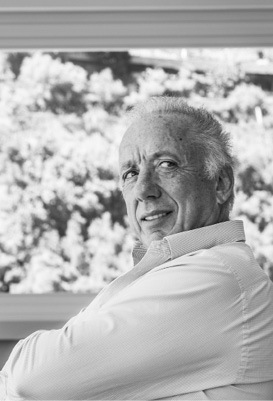 The colour white is also the overarching theme of Casa Angelina’s rooms - a representation of light and an apt metaphor of the Mediterranean’s warmth. Luxury toiletries from L’Occitane and Jo Malone, in addition to Bang & Olufsen sound systems, pamper the senses in an understated but unequivocally sumptuous way. Casa Angelina’s clientele is mostly comprised of anglophone millennials, who appreciate the minimalist, ergonomic sophistication of the furnishings and facilities.

The hotel’s philosophy revolves around the concept of “barefoot luxury” - relaxation without pretentiousness, elegance without opulence, and modernity with an eye set on tradition. Casa Angelina’s restaurant, Un Piano nel Cielo, located on the top floor, dazzles diners with picture-perfect sunsets from its terrace and panoramic windows. The cuisine, led by Chef Leopoldo Elefante, harnesses the freshness and quality of local ingredients to produce an extravaganza of Mediterranean dishes - from the Pesce Azzurroto, the Mischiato Potente and the Zuppa di Torzelle, all accompanied by fine wines from a 4,000-plus bottle cellar. Casa Angelina offers the ultimate escapist experience with its 4 majestic Eaudesea Experience rooms, located on the secluded beach of La Gavitella. These former fishermen’s houses, accessible by elevator and a 200-step stone-laden stair, represent the pinnacle of privacy and unbridled relaxation. Not one for resting on his laurels, Antonino welcomed two new business partners in August 2017: German entrepreneur Kjeld Schiøtz and his wife Dina. Kjeld, who played a big part in Antonino’s earlier success in the toy industry, has remained a good friend since. The ambitious trio is now aiming to make Casa Angelina an even greater success.