For New York high flyers, John Voigtmann and his then wife, Ondine Cohane, the lure of Tuscan fields and a life less frantic was calling. Ex-Sony music executive John, along with Condé Nast Traveler contributor, Ondine, had both enjoyed a wanderlust that led them around the world, calling places like Taiwan, Ireland and New York home. Ondine had lived in Italy as a child, and together they visited the picturesque areas of Montalcino, Pienza and Val d’Orcia, which instantly won them over. In 2001 this media couple returned in search of a location for their wedding, and stumbled upon an old stone farmhouse called La Bandita near Pienza, an idyllic UNESCO Heritage village. It was one of those eureka moments, or more accurately, a “crazy idea” as John likes to call it. Ondine describes the site “with cows camped out in the future living room and two pigs where we imagined the suite would be.” Needless to say, having a clear vision was crucial. 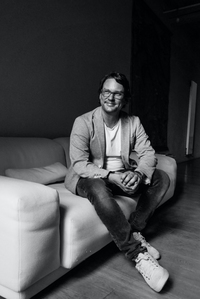 The property was owned by a sheep farmer who used it to house pigs… without electricity, plumbing, or even a single tree in its midst. Yet John and Ondine decided to take the leap anyway and prayed like hell for a net to appear. Somewhere amongst the crumbling walls and the farm animals, they visualised a boutique hotel. Nothing “too fancy,” just “a place where friends and friends of friends could relax in the area.” John recalls. “It was remarkable… that in an area with all that beauty, those stunning villages, there were so few places to stay in the Tuscan countryside. One found either big resorts removed from the real Italy or musty old villas.” This project was soon to become an all-consuming love affair, and those rarely happen without their fair share of ups and downs.

One day you’re chasing rockstars around the world, the next you’re venting to the neighbouring sheep. Over a bottle of Brunello, John and Ondine planned to transform this ruin into the sort of hotel they’d want to stay at – somewhere between luxury and informality, but this was no mean feat, and the red tape involved brought tears to their eyes, and pockets. With the help of an architect couple, generous investor, loyal builders and many Aperol Spritz, La Bandita Countryhouse finally opened its stylish doors in 2007 to an appreciative, and often amorous crowd. Despite coming into this without a clue about running a hotel, their many travels and hotel stays served them well. La Bandita became a roaring success, something like “The Grand Budapest Hotel, only set in Italy and full of Latin passion”, in the words of Ondine. A sleepy Italian bolthole enjoying its fair share of raunchy romps and whispered sweet nothings – if only the sheep could talk.

Flying on the success of their first venture, John and Ondine decided to take the leap on a second project – this time a 16th-century former nunnery that was to become La Bandita Townhouse. Following in the footsteps of their super stylish Countryhouse, the Townhouse is equally impressive – part convent austerity, part modern luxury. Located directly inside the ancient village of Pienza, this 12-room property is a medley of wood-beamed ceilings, geometric four-poster beds and splashes of colour, helped by the keen eye of interior designer, Ernesto Bartolini. But reaching this point wasn’t without its challenges. From gutting the original convent in 2013 to meeting all of the building requirements, it demanded even more grit and determination than their first time around. The impossible had to become possible. “If you have three floors you are required to have an elevator. But historic regulations say ‘No elevators!’ Also, the demo work was very challenging. In order to bring a crane into an old village, we had to lift it in with another crane!” Rolling up his sleeves, John meant business, and nothing was going to get in his way.

But La Bandita experience is more than yet another designer boutique hotel. It’s an immersion in the local community.

“You can feel Italian life happening all around you.”

From the elderly woman hanging out her washing out 3 days in a row to the sweet smell of pasta sauce being prepared for lunch. Somewhere between swapping their fast-paced lifestyle and meeting the monumental task of creating this business, new roots were planted. Whilst John and Ondine are sadly no longer together, they remain good friends, and their son, Jacopo, has become something of a local celebrity with his golden locks and wondrous curiosity. Today the man who used to attend to the whims of Christina Aguilera and The Foo Fighters, tends to the needs of his guests.

“I want to be here on the property so I can meet the guests and share their stories.”

Life is beautiful, and messy, and nothing's ever promised. So like this adventurous couple, throw caution to the wind, follow your dreams and even when things don’t turn out quite how you’d imagined, just know that you’ve really, really lived. And if you can do it in hot-blooded Italian style, even better - they don’t call it La Dolce Vita for nothing.