There are boutique hotels and then there’s Masseria Dagilupi. What was once an ancient oil mill, this Puglian hideaway is now home to just three guest suites. As one would expect from such an intimate venue, the service has a very personal touch, which is just as the locals, and new owners, like it.

Creative couple, Danielle and Jean-Louis, originally from France, acquired the mill in 2017 after deciding to embark on a new life adventure. Having raised their children, and following a change in Jean-Louis’ work, it felt like the perfect time to follow their hearts, love of great food and this southern region of Italy. As Danielle puts it;

“You can just feel the energy coming from this land.”

The ‘heel of Italy’ is a very special place. Steeped in history and natural beauty, this is one of the country’s hidden gems with the residents a very proud people. In fact, the term ‘buy local’ takes on a whole new meaning when you consider the Apulians are totally immersed within their community, with an unfaltering loyalty to their roots. The ‘Slow Food’ movement may have increased in popularity in recent years, but to the locals, it has always been their way of life. Most residents grow their own food — going to the local store is too far — going to the neighbouring village might as well be another country;

“Tomatoes do not taste the same, the oil is not as virgin as it claims and the women there do not cook the orecchiette as well as our mothers."

Originally called ‘Trappeto Lettiga’, the story behind this former mill is a colourful one. Provincial Census shows the earliest proprietor being a horseman of the militia, who defended the neighbouring city of Ostuni. By 1601, the property had changed hands and was now owned by Father Giovano Lercario, until his death in 1621. It would appear that the mill continued to operate until the middle of the 19th century, producing lamp-quality oil sold for public lighting, but when the market for this type of oil collapsed, the Trapetto found itself another purpose — as a warehouse for agricultural produce and equipment, and storing smuggled cigarettes! With the Adriatic Sea a mere 4km away, and the mill cloaked in 400 olive trees, it made for the perfect hideaway. 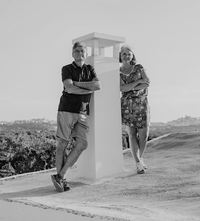 As the word ‘Lettiga’ literally means ‘litter’, new owners Danielle and Jean-Louis, rightfully decided to rename it, and Masseria Dagilupi was born; ‘Masseria’ meaning a fortified farmhouse. With the original mill buried underground within a rugged hand-carved ‘cave’, and the oldest of the six oil presses boasting features that date back to the late Messapian period, a respectful restoration was crucial. However, as the old farmhouse had no electricity or running water, it wasn’t the easiest of projects, yet this labour of love still resulted in the extraordinary property that stands today.

At sunset, the whitewashed stone-walls of the Masseria take on a veil of pink and gold, whilst the interior reflects the new owners’ vision of how a retreat in Puglia should be: spacious rooms, large bathrooms, minimalist décor and the best of Italian design. With limited square footage, Danielle and Jean-Louis, decided that space equated to luxury, and sacrificed having more rooms for larger ones:

“We believe that luxury in hospitality is first of all space: our bathrooms are spacious, and our rooms are commodious with very high-quality king-size bedding.”

Today, Masseria Dagilupi is a luxurious haven of peace and serenity, set in the sun-drenched region of Puglia, nestled between the Adriatic Sea and Ostuni. The limed exterior and vaulted ceilings reflect the simple beauty of the past whilst the stylish décor and modern fixtures, provide the best of today. Whether you choose to explore this captivating region, or simply stay and let your stresses ebb away — there are wellness treats on offer, from yoga to massage and you can even hug a tree, some are more than 1000 years old — just remember, should you wish to smuggle anything, this Puglian treasure also provides total escapism. There’s nothing but the sound of crickets to disturb you.