Venice - perhaps the most architecturally remarkable of all Italian cities. It is on the iconic Canal Grande that Palazzina greets its distinguished guests with an unprecedented combination of visual glamour, Venetian elegance and uncompromising luxury. The genesis of Palazzina is one of stylish ambition. Emanuele Garosci, a debonair Turin-based entrepreneur, purchased the 2800 square-metre 16th-century palace, the first residence of the noble Grassi family, in 2009. Palazzina became the first Italian hotel designed by award-winning French designer Philippe Starck. He was the perfect choice - a life-long lover of Venice with a residence on nearby Burano Island and a believer in reflecting the natural local environment in design form. The 25-room structure, its voluptuous interiors and impeccable service became an instant success, landing it on the Fortune Magazine Best Business Hotel list and the Condé Nast Traveller Hot List in 2010. The story of Palazzina took a sudden and unexpected turn in 2015. 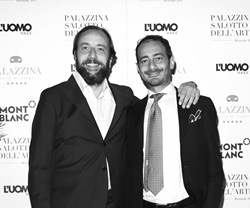 Emanuele’s premature death led to the property’s sale and his good friend Antonio Onorato took the challenge. The concept of Palazzina was realised in 2008 with the help of the native Venetian manager, the same person who had previously supported Garosci to develop the Nhow Hotel in Milan while he was the CEO of NH Hotels in Italy. In August 2016, Antonio and his partner Stefano De Santis, a famous Milanese lawyer, through the holding Relegance, managed the purchase of the palace and got to work on its master plan - establish Palazzina as Venice’s leading boutique hotel and most exclusive venue for glamorous events, business gatherings and nightlife entertainment. The Palazzina is accessible directly from the Grand Canal by water taxi.

The discrete, unmarked entrance gives guests an immediate sense of having entered a private haven of aesthetic beauty and unmitigated charm. Starck’s vision of luxury merged with Venetian uniqueness is fully visible in the choice of materials and furnishings. Marble, mahogany and glassworks by French artist Aristide Najean combine to create a modern and charismatic symphony for the eyes. The corridors, adorned with soothing pastel colours, are all lit softly to seduce the guest in an atmosphere of relaxed sophistication. The theme of Palazzina’s rooms is that of water - reflective, fluid and calm. The hotel’s 173 exquisitely ornamented mirrors, handcrafted by the master glassmakers of Murano, magnify its spaces. The evening shimmer of the Canal Grande is reflected into every suite, creating a surreal and enchanting spectacle of light. Palazzina also distinguishes itself as the pulsating heart of Venice’s evening entertainment. Celebrated international DJs are invited to animate its events, regularly attended by global icons like Johnny Depp, James Franco, Al Pacino and Madonna, to name only a few. The Venice Film Festival and the Biennale, Venice’s preeminent art exhibition, turn Palazzina into the go-to spot for actors, film producers and critics.

The Palazzina’s unrelenting focus on excellence is also seen in its culinary endeavours. Palazzina the Restaurant combines the best of the Venetian and Italian cuisine. Fresh fish sourced from the local Mercato di Rialto, organic vegetables from Sant’Erasmo island, hand-made pasta and ravioli, magically weaved to create an extravaganza of dishes that rejuvenate ancient gastronomical traditions. The Bar, inspired by Harry’s Bar, is a spectacle of marble columns and jewelled tables, making for an atmosphere of refined relaxation. The Krug Lounge, the second of only two in the world, lets guests savour champagne while witnessing the timeless allure of the Venetian canal life. Its wooden panels and leather furnishings provide a delightfully comfortable setting to unwind after a day of cultural immersion.