Along the banks of the Salzach river, is the picturesque old town of Salzburg - birthplace of Mozart, UNESCO World Heritage Site, and home to two of the most elegant hotels in the city. Hotel Goldgasse and Hotel Stein are not only owned by the same group, but also set an impeccably high bar in this most enchanting of settings.

Starting life as a coppersmith’s workshop some 700 years ago, Hotel Goldgasse still retains much of its Medieval charm as its winding stone staircase, stucco façade and flagstone floors all serve as a reminder to its historic roots. Close your eyes and you can still hear the horse-drawn carriages pulling up along the cobblestone streets that once made up the goldsmiths’ district. An ode to Opera, and dedicated to the famous Salzburg festival, each of the 16 impeccably designed rooms offer a fun, decadent space, with huge murals that cover entire walls, for a touch of drama. With a spectacular vaulted restaurant serving the breakfast (lunch and dinner) of kings, traditional favourites such as beef tartare and homemade strudel will satisfy the most discerning of palettes. Close to the Baroque-style 17th-century Salzburg Cathedral, Residenzplatz and all the 15th and 16th-century architecture, this historic bolt hole certainly is the stuff of fairytales.

Just when you thought things couldn’t get any better, along comes Hotel Stein. An inn since 1399, over the centuries it has evolved into a truly luxurious boutique hotel. Fully renovated before reopening in the spring of 2018, like Goldgasse, this design hotel also sets the bar exceptionally high. Set on the banks of the Salzach River, Hotel Stein is quite possibly the finest hotel in all of Salzburg. Modern art meets contemporary design for the décor, whilst the colour blue permeates throughout the hotel infusing peace, harmony and the notion of infinity. The stunning rooftop restaurant, Steinterrasse, not only serves exceptional fare, but also provides panoramic views across the entire city, from the the city’s emblematic Hohensalzburg Fortress sitting majestically above the rooftops, to the snow-capped Alps, with the glimmering lights of the city beckoning below. Just steps away from the Mozart Hotel, as well as the main bridge over Salzburg, this adults-only retreat is a Medieval dream come true. 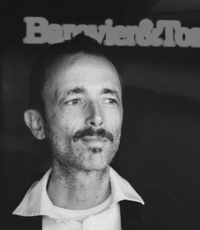 If you love Venice, you will adore Salzburg. Heavily influenced by Italy since the 16th century, this historic town owes more than a nod to the Italians. It all began when Venetian architect Vincenzo Scamozzi was commissioned to design a new city layout, and then under his successor, Santino Solari, the city underwent a remarkable makeover that would make Salzburg the masterpiece it is today. This style of ‘Salzburg meets Venice’ makes total sense when you learn that the owner of both of these exceptional hotels is none other than Rinaldo Invernizzi of Barovier & Toso, the world’s oldest and most celebrated glassmakers, whose art of bringing together the traditional with the beautifully modern, has been their winning formula for centuries.

This incredible Venetian glassmaker, hailing from Murano, has worked his magic not only in the world of glass but now also in hospitality. His unique brand of excellence has led to success in both fields. And many of his spectacular light fixtures and glassworks can be found in Hotel Stein creating a look that is at once unique and outstanding. Rinaldo also commissioned world-famous fabric house Rubelli, to create exclusive textiles for the interior. You might be in Austria, but you could easily be forgiven for thinking you are in Italy. The marriage between the two is as outstanding as the Marriage of Figaro, composed by Wolfgang Amadeus Mozart himself, widely considered to be one of the finest operas ever written. Book a room at either hotel and find yourself transported back in time, where fairytales weren’t just the stuff of make-believe.