Your Ultimate Guide To: Lisbon

Affectionately dubbed ‘the Queen of the Sea’ by writer Damião de Góis, this port city has undeniably been shaped by the water. In fact, ancient Roman historians claimed Lisbon was founded by Ulysses, Homer’s mythical hero, on his journey home from Troy. As Europe’s second oldest capital, Lisbon is bathed in history, and decorated with the most beautiful ancient architecture. Follow your heart through the winding cobbled alleyways and scale the steep city slopes as you discover the beating heart of Portugal’s capital.

What To See And Do 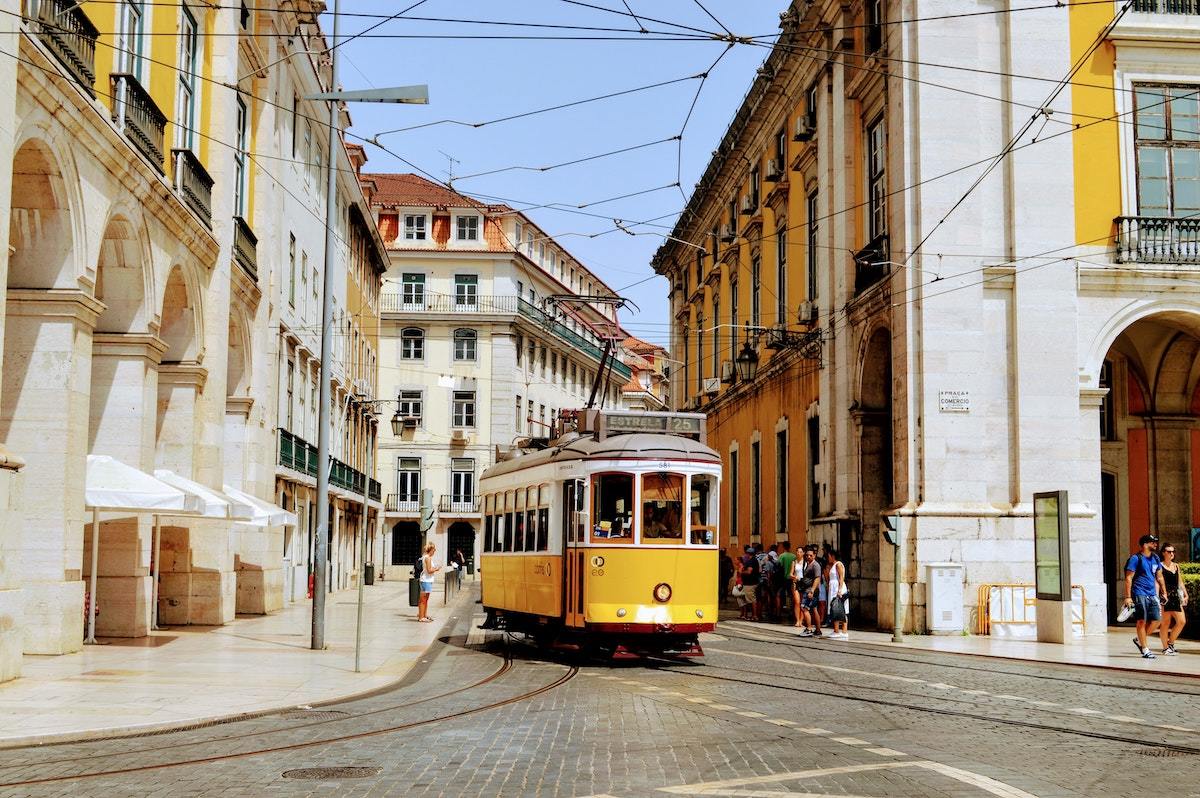 With its steep hills and cobblestone staircases, your Fitbit is going to clock up some serious steps in Lisbon. With so many areas to explore, travelling on foot will ensure you don’t miss out on any hidden treasures, but when the slopes get too steep, and the shopping bags too heavy, there are plenty of funiculars ready and waiting to assist. These quintessential national monuments have all been painted yellow and are the most environmentally-friendly way to go up and down. Rua da Bica de Duarte Belo is Lisbon’s most photographed street, in part thanks to its decorated tram, painted by local artists. Walk along the banks of River Tagus (Rio Tejo), or wander through the beautiful gardens of Parque Eduardo VII, one of the city’s largest parks. Roll over Paris and Rome, Lisbon is set to become one of Europe’s most unexpected city favourites. 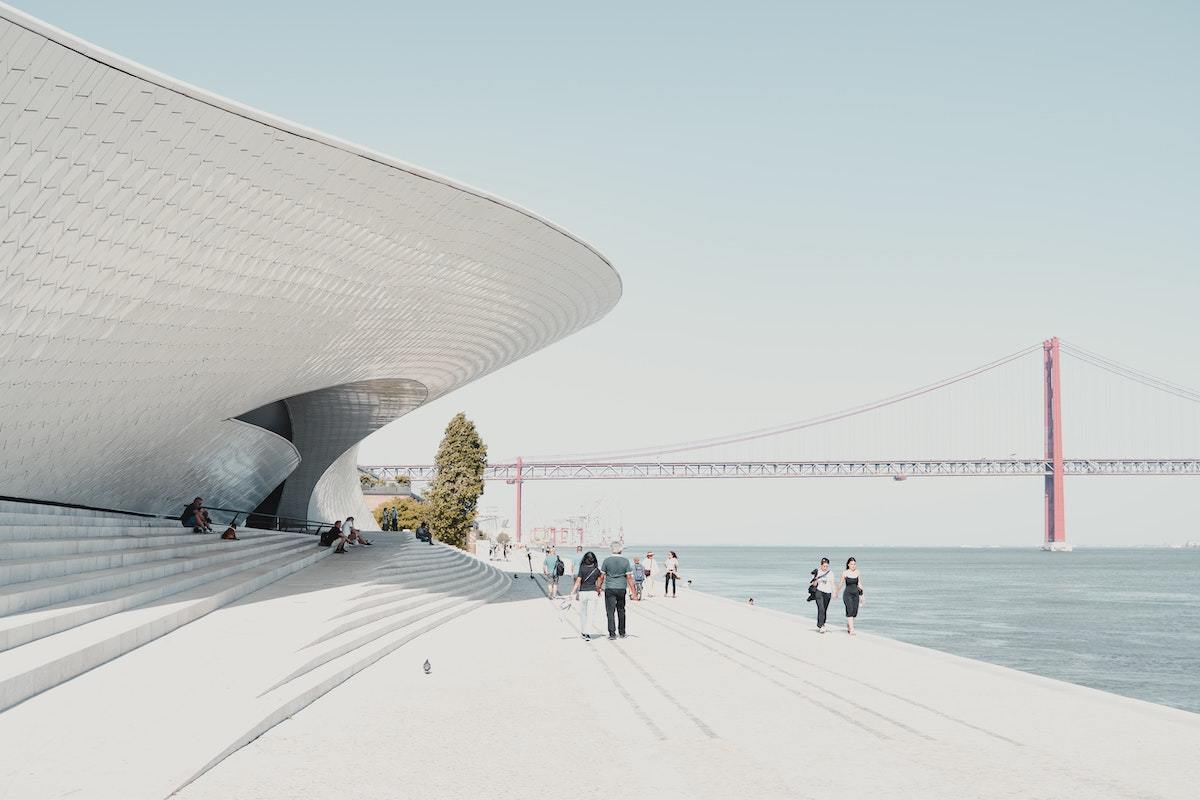 To give you a sense of just how old Lisbon really is, the São Jorge Castle is one of the oldest man-made structures in all of Europe, originating in the 8th-century. Set proud on the São Jorge hill, and illuminated nightly, this is one of the city’s most emblematic landmarks. Lisbon also boasts Europe’s longest bridge – Vasco da Gama - named after the legendary Portuguese explorer, at a record-breaking 12.3 km long, spanning across the magnificent Tagus River. Originally built as a gateway to the city, the Torre de Belém is part of the UNESCO World Heritage, and dating back to the 16th-century, a cornerstone of the city. Whilst standing tall at 147 ft. the fabulous neo-gothic Elevator de Santa Justa, is not only the city’s only vertical street lift, but one of its most celebrated sights too. 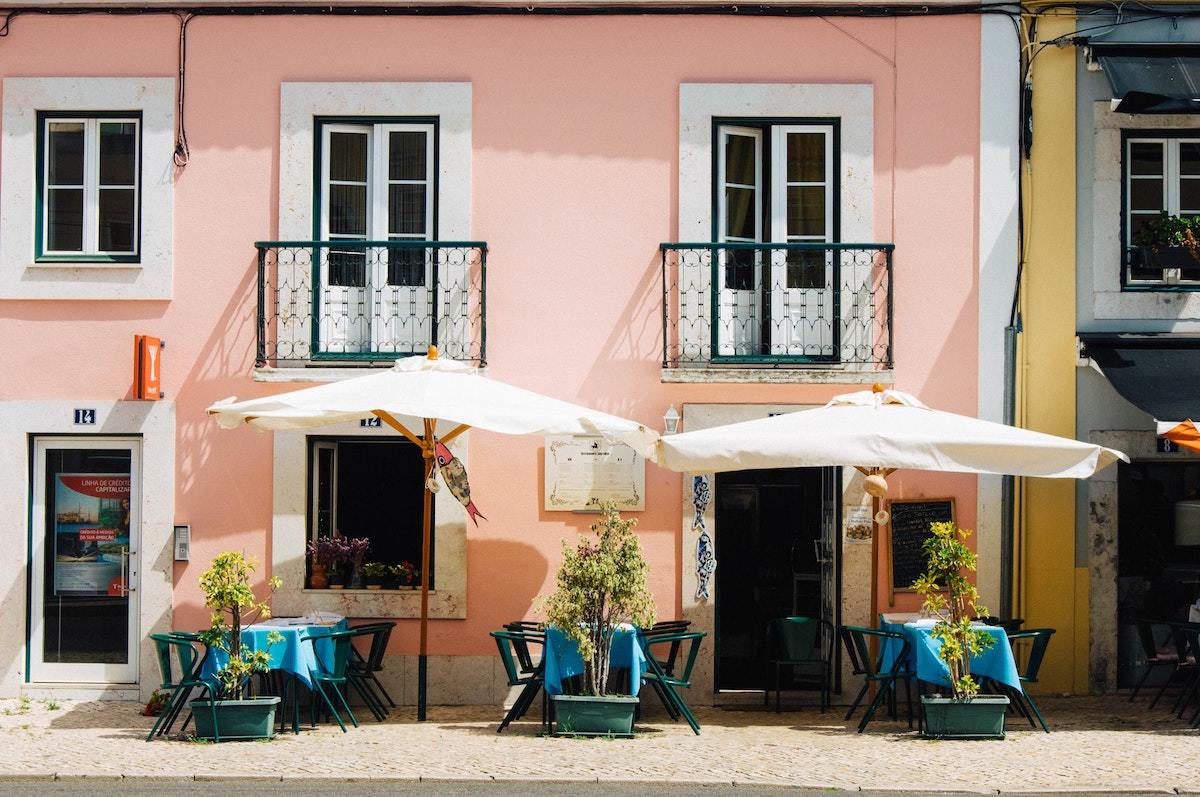 Lisbon has everything you could possibly want, from sleepy little seaside towns to bustling city-action. This Portuguese capital is now considered to have some of the best street art around, with home grown talent such as Vhils and Bordalo now showcasing their work all over the world. Fado is Portugal’s traditional music, which originated in 1820’s Lisbon. There are many ‘fado houses’ where you can listen to its sounds, which was added to UNESCO’s list of the World’s Intangible Cultural Heritage in 2011. Bairro Alto is the city’s party district, with Rua Cor-de-Rosa (named Pink Street when an urban renewal project painted the pavement pink) literally paving the way to the best cocktails and clubs in town. But take heed – most clubs in Lisbon don’t open their doors until midnight, so expect to be home by sunrise, and take your shades. If you like your nights with a heavy dose of intrigue, Lisbon does a good job at keeping some venues cloak-and-dagger – Bar Afterhours used to be a house of ill-repute but today this historic haunt without windows attracts an interesting clientele – if only the walls could talk. 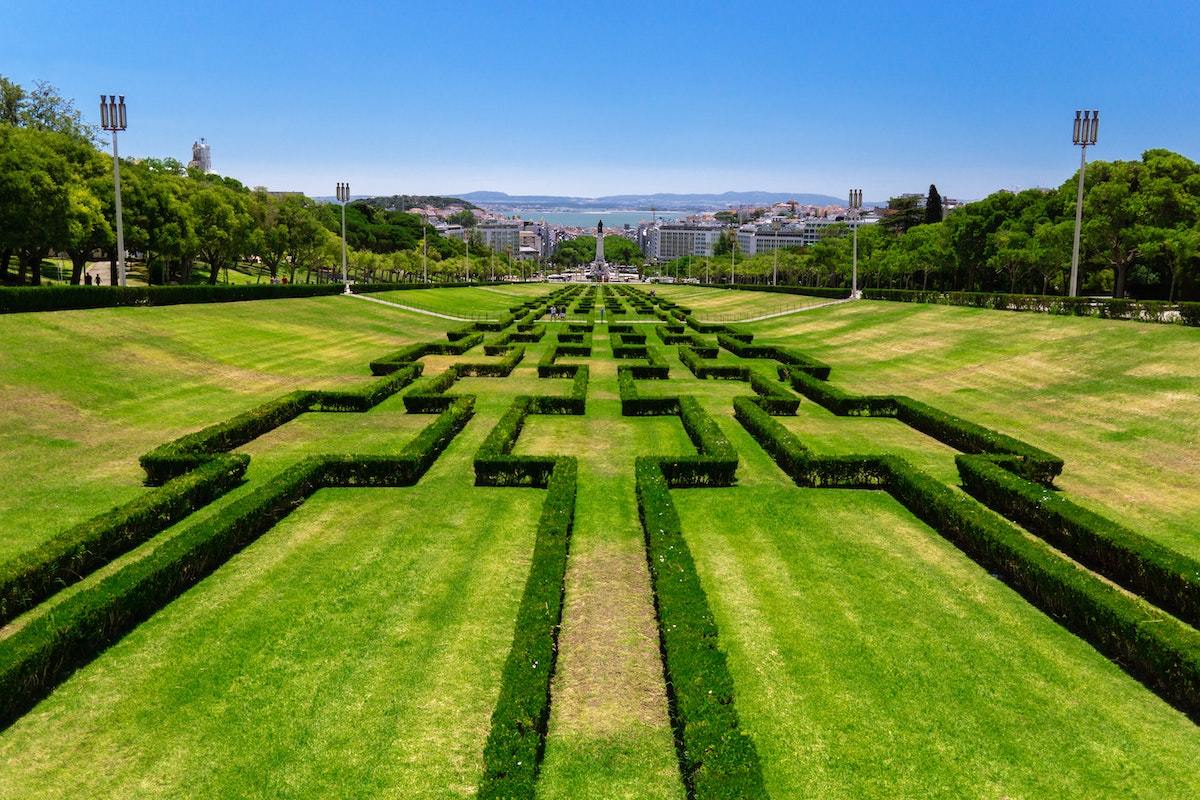 Built on hills, seven of them to be precise, Lisbon enjoys an incredibly striking landscape. Each of the seven viewpoints known as a ‘miradouro’ offers a different picture postcard vista, with Miradouro da Senhora do Monte widely regarded as the best; relax with a friend, or lose yourself in a book at one of the many cafés as you drink in the spectacular views. Bordered by the Atlantic Ocean, Lisbon also happens to be a mecca for surfers. We have it on good authority that the best rips and curls can be found at the beaches of Carcavelos, Praia do Guincho and Costa da Caparica. Not only does this coastline attract wave-seekers but the quaint little town of Ericeira, is also Europe’s only World Surfing Reserve. If you’re more of a lay on the beach kind of traveller, and in search of peaceful seclusion, Praia da Ursa is just 50 metres wide and utterly beautiful. Be prepared for a steep descent, but your efforts will certainly be rewarded. 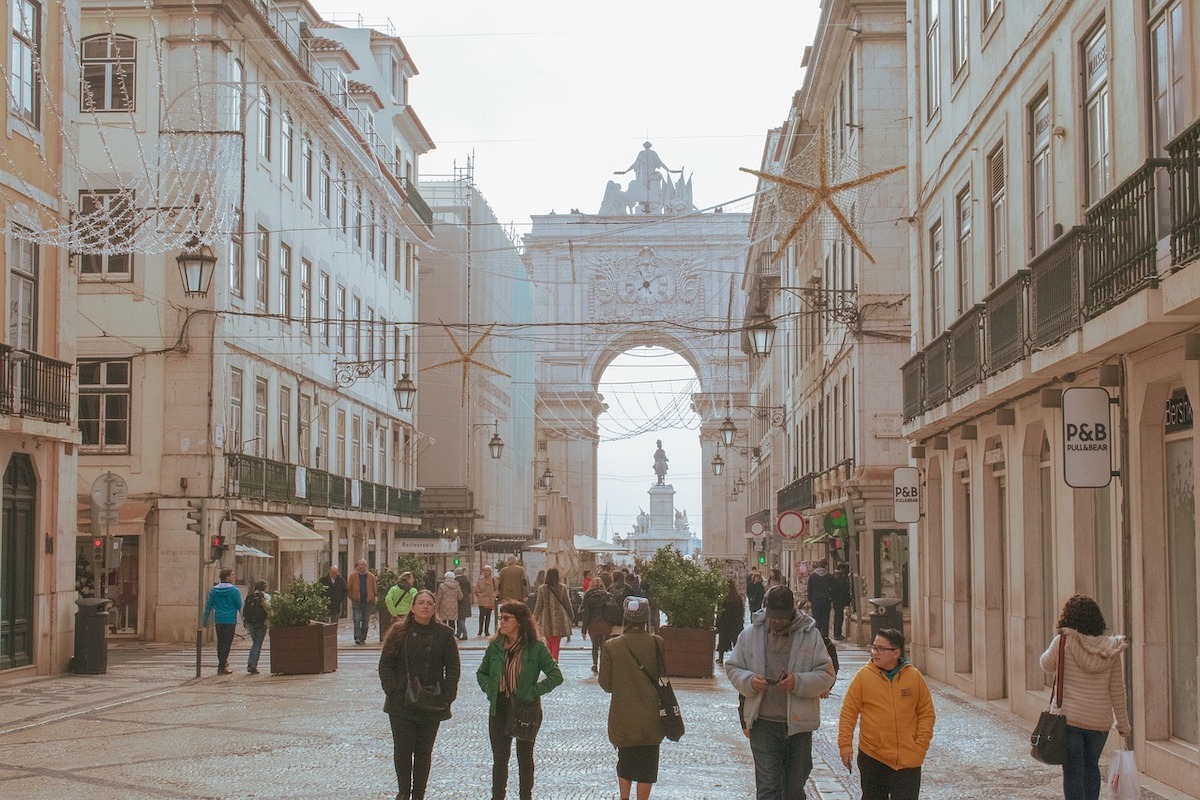 Lisbon still remains one of Europe’s least expensive capitals, which means you can pack your case with even more goodies than usual. Principe Real, is a gentrified part of town that’s now home to some of the city’s most gorgeous mansions and concept stores; perfect for boutique-lovers looking for that unique find. Chiado is widely considered to be the trendy quarter, where open air shopping can be enjoyed under the glorious Portuguese sun, which is almost always shining. If circular fashion is more your style, the Feira da Ladra is an expansive flea market with a dazzling array of all things vintage and pre-loved; whilst Mercado da Ribeira (Time out Market) is your one stop shop for fresh produce, fish, and bloom after bloom of colourful flowers. Those who can’t resist a little luxury should head to Avenida da Liberdade where Chanel, Gucci and other highbrow friends can all be found. One of the most beautiful stores in Lisbon has long been regarded to be, San Giorgio – a historic Art Nouveau emporium supplying the finest men’s suits since 1972.

Fun fact – Portugal is the top cork producer in the world, with half of the world’s cork-producing trees grown there. Cork & Co is a concept store selling fabulous cork creations! 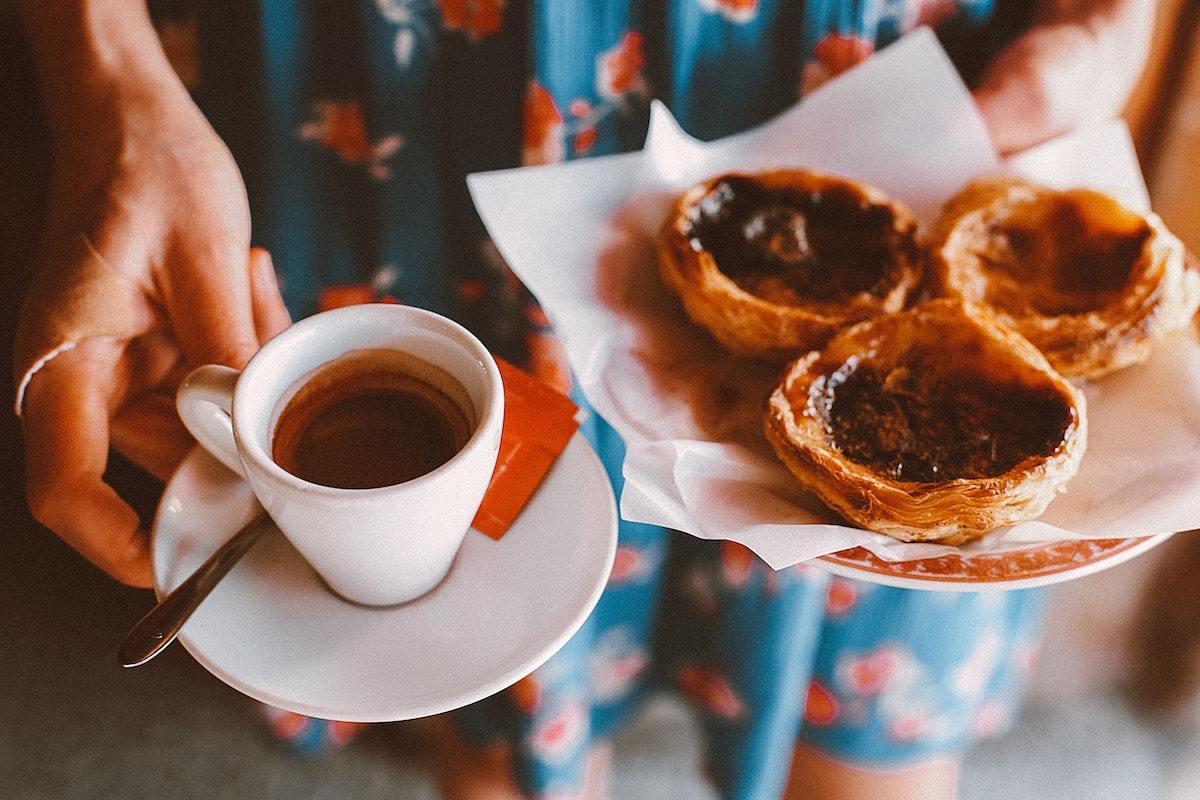 Portugal is well-known for its simple, honest fare, made with fresh, local ingredients. Pastéis de Nata is a Portuguese institution, and has been made here for over 300 years. The story goes that when the monks at Jeronimos Monastery were looking for a way to use up the egg yolk after using the whites to starch their clothes, they came up with these heavenly custard tart creations. In 1837 the Pastéis de Belém (undeniably the best place to sample these) bought the recipe from the monks and have been satisfying the locals ever since. Being a coastal city, seafood is always on the menu. Balcalhau, a dried and salted cod, is a Portuguese staple, and can be eaten several different ways, but if you’re feeling a little more experimental, don’t pass up the opportunity to try a plate of Percebes (otherwise known as ‘goose barnacles’), a hard to acquire crustacean that lives on the rocks in the Galician and Portuguese coastline. If you insist on sticking to your kale, Caldo Verde is the Portuguese equivalent to chicken soup, combining healthy green goodness with potato, onion, chorizo and olive oil to wholesome perfection!

Once the home of Eça de Queirós, one of Portugal’s most respected novelists, this 18th century palace is thought to have inspired ‘O Ramalhete’ in his most iconic work, ‘Os Maias’. Under a veil of lush green ivy, this historic hotel is situated next door to the National Ancient Art Museum, and just a 10-minute cab ride from Lisbon’s Romanesque cathedral, Sé.

Set within the old design quarter of the city, guests can explore the cobbled streets where hidden churches, restaurants and stylish boutiques await. This Lisbon Heritage establishment offers 29 elegant rooms, all with sumptuous décor, plush linens and indulgent Molten Brown bath and body treats for a seriously luxurious stay. From the grand spiral staircase which takes pride of place in the heart of the building, to the rooftop library with stunning views over the city, and the Tagus, the romantic As Janelas Verdes is sure to steal your heart.

Set within the walls of the historic São Jorge Castle, perched proudly atop medieval Alfama, Solar do Castelo exudes utter romance and style. Built on the ancient kitchens of the Royal Palace, this 18th century mansion has been decorated with genuine antiques and bespoke medieval style furniture for an authentic noble vibe. 20 individually decorated rooms border a spectacular inner courtyard, where guests can enjoy an aperitif alfresco from the hotel’s honesty bar whilst bathing in the glorious sun, alongside the majestic resident peacocks.

All areas of this property are exclusive to guests only, who can also be greeted at the gate by their own personal golf cart, when they’re ready to explore. Close to the Lisbon Cathedral, Sé, the cobbled streets of Alfama hold much charm, as they wind down a row of charming cafés and avant-garde boutiques, as you meander towards the sea.

After undergoing a major refurbishment in 2015, this elegant boutique hotel offers both tradition and contemporary comfort, with Portuguese heritage weaved throughout. Owned and managed by the same family since its construction in 1953, Hotel Lisboa Plaza succeeds in serving up a relaxed, and almost homely ambiance, albeit a grand one. Sat pride of place alongside the exclusive Avenida da Liberdade, the best in designer stores lure guests with their opulent windows, whilst fine dining restaurants abound to satisfy even the most refined of palates. Just 1 Metro stop from Marquês de Pombal Square, and close to the Botanical Gardens, this hotel’s location cannot be beat.

There are 94 well-appointed rooms, including 12 sumptuous suites, blending original antiques with sexy designer pieces. Hospitality here goes above and beyond, with long-serving staff ready to attend to your every whim. At this wondrous hotel, guests are treated like family.

The stunning blue and white 18th century façade of this boutique bolthole, is reminiscent of its Moorish roots. The careful restoration and decoration of the building was given to acclaimed Portuguese architect, Miguel Câncio Martins, ofBuddha Bar and Man Ray fame. The historical exterior however belies the contemporary style of the interior, where traditional features are paired with modern touches for a truly urban feel.

Located on Avenida da Liberdade, one of Lisbon’s swankiest shopping streets, you know you’re in store for a super luxe stay. The city’s Lavra funicular is conveniently situated next door, whilst the iconic Hot Club of Portugal, the country’s oldest jazz bar, and widely considered to be one of the best in the world, is just a 5-minute walk away. There are 42 pretty rooms to choose from, as well as a fitness room with a jet pool to invigorate even the most shopped-out souls here at Heritage Avenida Liberdade.

As the only hotel to remain intact in Lisbon, gaining its classification as a Historical Building, Hotel Britania shines resplendent in all its Art Deco glory. Originally a 1940’s townhouse designed by the illustrious architect, Cassiano Branco, every feature of this prime real estate has been meticulously restored and married with contemporary touches for true modern day glamour.

Expect comfort and style in any of the 33 spacious rooms, each boasting a marble bathroom, air-conditioning, satellite TV and luxurious Molton Brown amenities, not least forgetting original Art Deco furniture for a throwback to more decadent times. Central located, the best of Lisbon is just waiting on your doorstep. Steps away from the chic Avenida da Liberdade, guests can enjoy a myriad of luxury stores, Michelin-starred restaurants and lively bars for a taste of the city’s finest. With subdued lighting and an air of exclusivity, Hotel Britania feels more like a private member’s club than anything else.