Famous Landmarks: Location Lookalikes To Visit In The UK

Have you been wanting to get away to see some of the world’s most famous landmarks but have had the Coronavirus pandemic get in the way of your plans? Here at HIP Hotels we wanted to help you to fill the gap between now and when you’ll be able to go abroad again, with some famous landmark lookalikes that you can explore right here in the UK! They may not be the one you were initially aiming for, but each of these incredible UK landmarks has a rich history of its own, sure to intrigue you and make a UK staycation feel that little bit more like a holiday!

Instead of the Taj Mahal, India 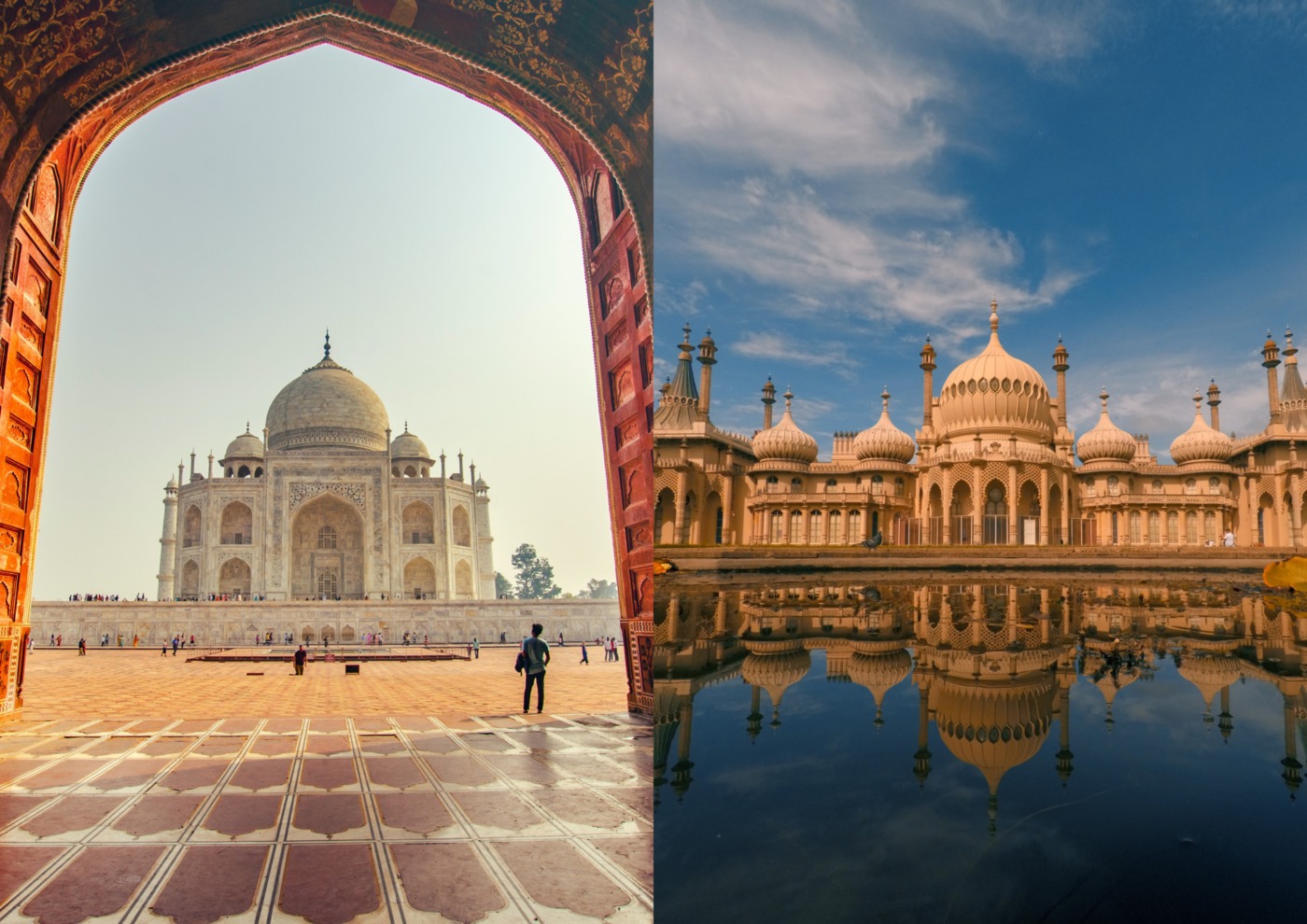 The Taj Mahal was built as a mausoleum to house the tomb of Mumtaz Mahal, the favourite wife of emperor Shah Jahan in the 17th century, and also houses his own tomb. The Royal Pavilion on the other hand, was built over a hundred years later at the bequest of George, Prince of Wales, as a royal residence seaside retreat. George eventually became the Prince Regent and then King George IV, and he continued to use The Royal Pavilion to entertain friends and guests throughout his reign. Designer John Nash used Indo-Islamic inspiration to create the domes, and the Taj Mahal arguably formed part of this inspiration. The interior was heavily influenced by Indian and Chinese fashions, much of which was hand painted and is still intact today. The Royal Pavilion has such a rich historical heritage - from the underground tunnels to its use as a military hospital for soldiers from the Indian Army during the First World War, there is so much to learn about this beautiful former palace. The Royal Pavilion will reopen this Saturday, July 10th, for anyone who wants to walk in the footsteps of royalty.

Instead of the Great Wall of China, China 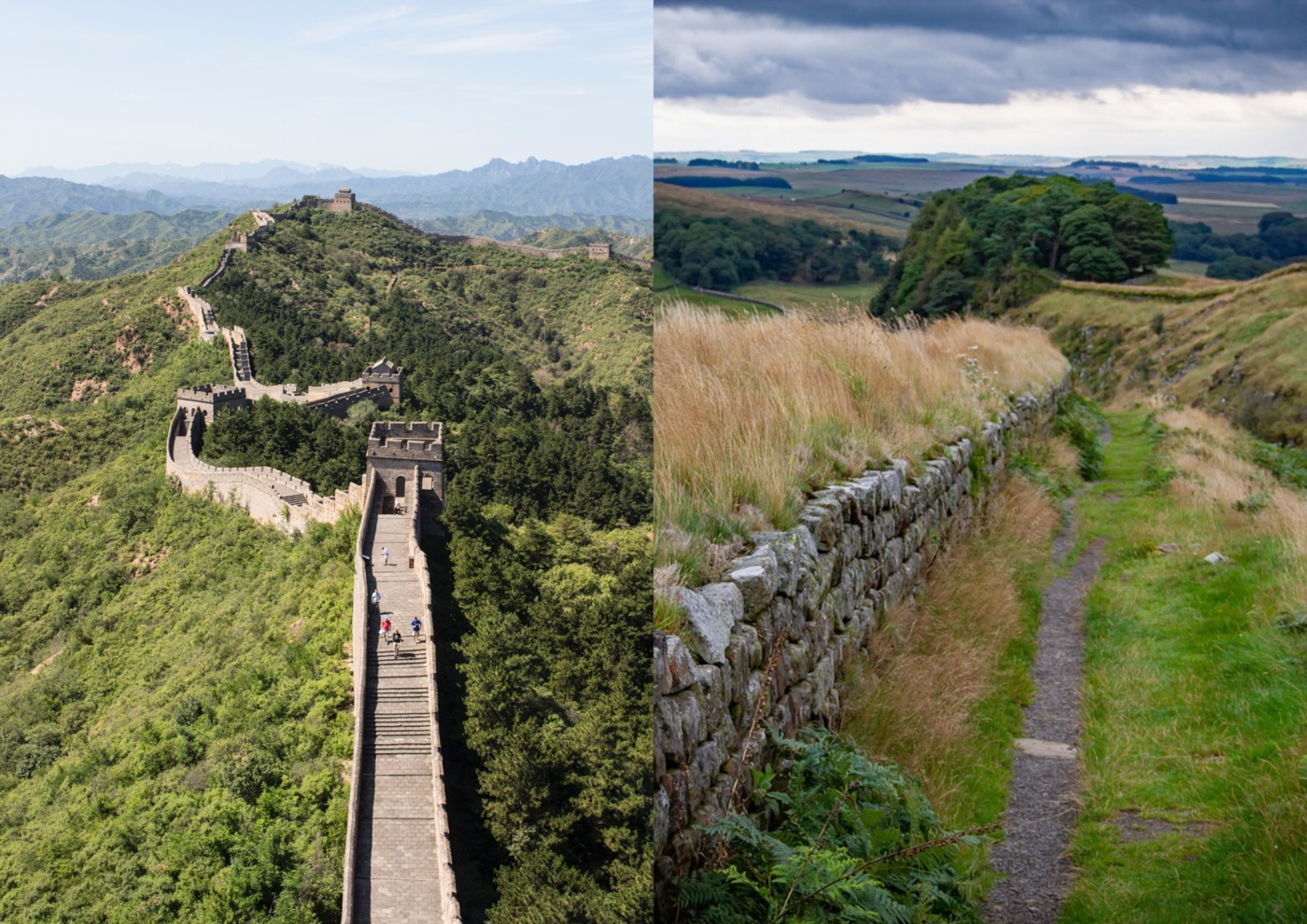 Both Hadrian’s Wall and the Great Wall of China are former fortifications built for military purposes. They are so similar, that the organisations that manage both walls began a collaboration in 2018 to highlight the historical and cultural history of each of the monuments, and they were declared World Heritage Sites in the same year, in 1987. The sections of the Great Wall of China that have remained intact, were built between the 14th and 17th centuries AD during the Ming dynasty, making it over a thousand years younger than Hadrian’s Wall. Construction on Hadrian’s Wall started in 122 AD and took six years to complete. Spanning the entire width of the United Kingdom, it acted as part of the Roman military’s defense, housing 10,000 soldiers in its forts and garrisons. Hadrian’s Wall marked the edge of Roman Britannia to the south and the unconquered Caledonia to the north and is completely unguarded in the English countryside, so you can visit whenever you like! Be sure to soak up some local Roman history and enjoy the fantastic views of one of England’s most dramatic landscapes.

Instead of the Golden Gate Bridge, San Francisco 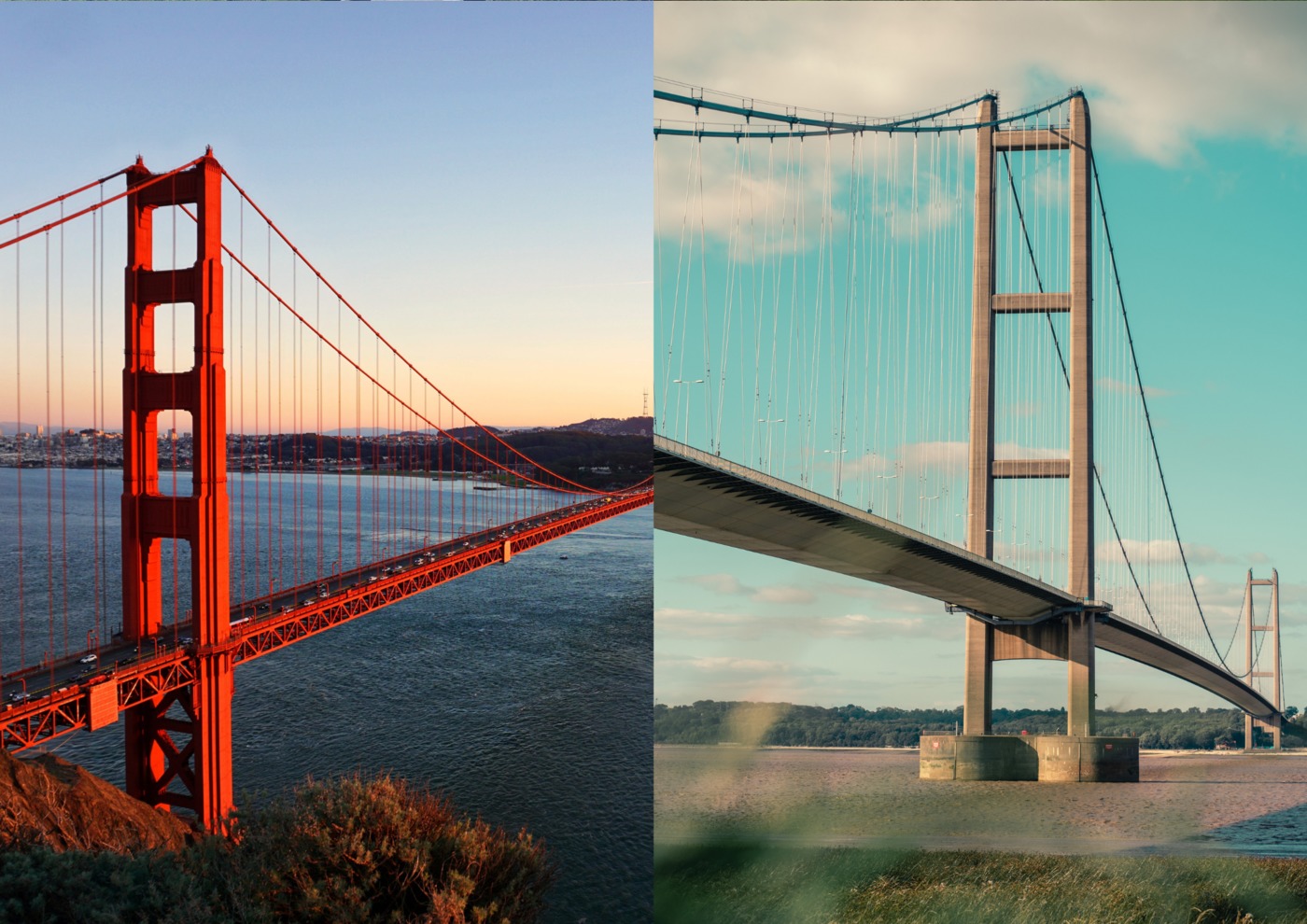 Opening in 1937 after four years of construction, San Francisco’s Golden Gate Bridge became the longest suspension bridge in the world, connecting San Francisco to Marin County. It stands as one of California’s most recognisable landmarks and was declared one of the Wonders of the Modern World by the American Society of Civil Engineers. The Golden Gate Bridge held its record of the longest suspension bridge until 1964, and it was not until 1981 that that record was broken by the UK’s very own Humber Bridge, whose main span sits 130 metres longer than that of the Golden Gate Bridge. The Humber Bridge took eight years to construct and was officially opened by Her Majesty the Queen in July 1981. In 2017 Historic England gave it Grade 1 listed status, making it the longest listed structure in the United Kingdom. It may not be the Golden Gate Bridge but Humber Bridge sits stunningly over the Humber Estuary, and is a lot easier to access for those currently in the UK!

Instead of Amsterdam Canals, Holland 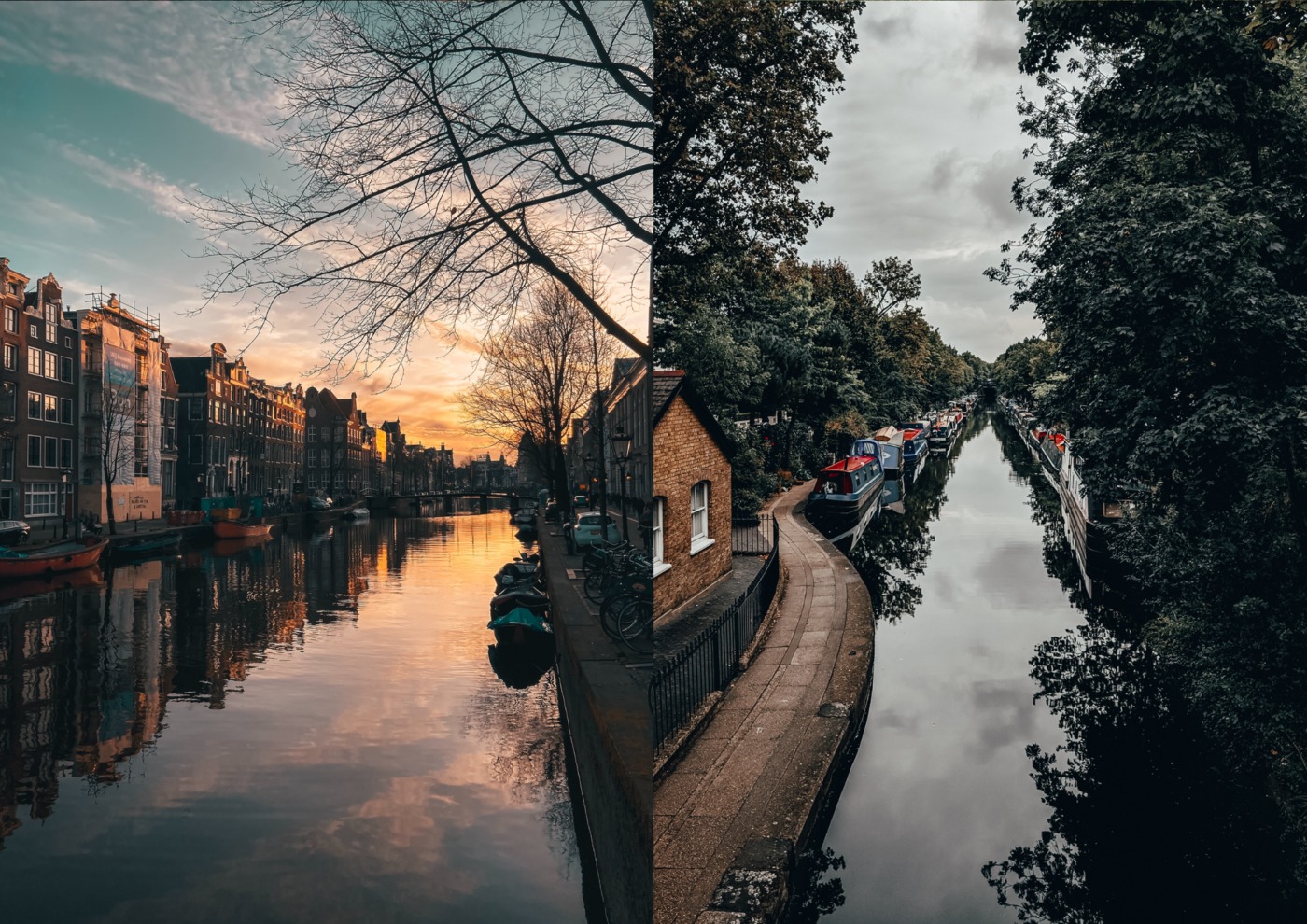 Although this quaint pocket of London has been named after Italy, it would be difficult to not compare it to the beautiful canals of Amsterdam. The capital of the Netherlands has more than 62 miles of canals with roughly 1500 bridges, and the three main canals Herengracht, Prinsengracht and Keizersgracht form concentric belts around the main city - if you saw it from above, you’d think it was a floating city! There’s no wonder it’s nicknamed “Venice of the North” and here at HIP Hotels we love that there’s a version of it right in the centre of London. Little Venice was once a popular spot for many artists, writers and scientists, who came to relax and draw inspiration from the beautiful waterways and tree-lined streets. The waterways are made up of Regents Canal, Paddington Basin and the Paddington Arm of the Grand Union Canal, and in the centre of the junction where they meet is a small island full of willow trees. So next time you’re in the city, take a stroll along the Little Venice canals, cycle over the bridges or hitch a ride on the Regents Canal Waterbus!

Instead of the Ancient Theatre of Epidaurus, Greece 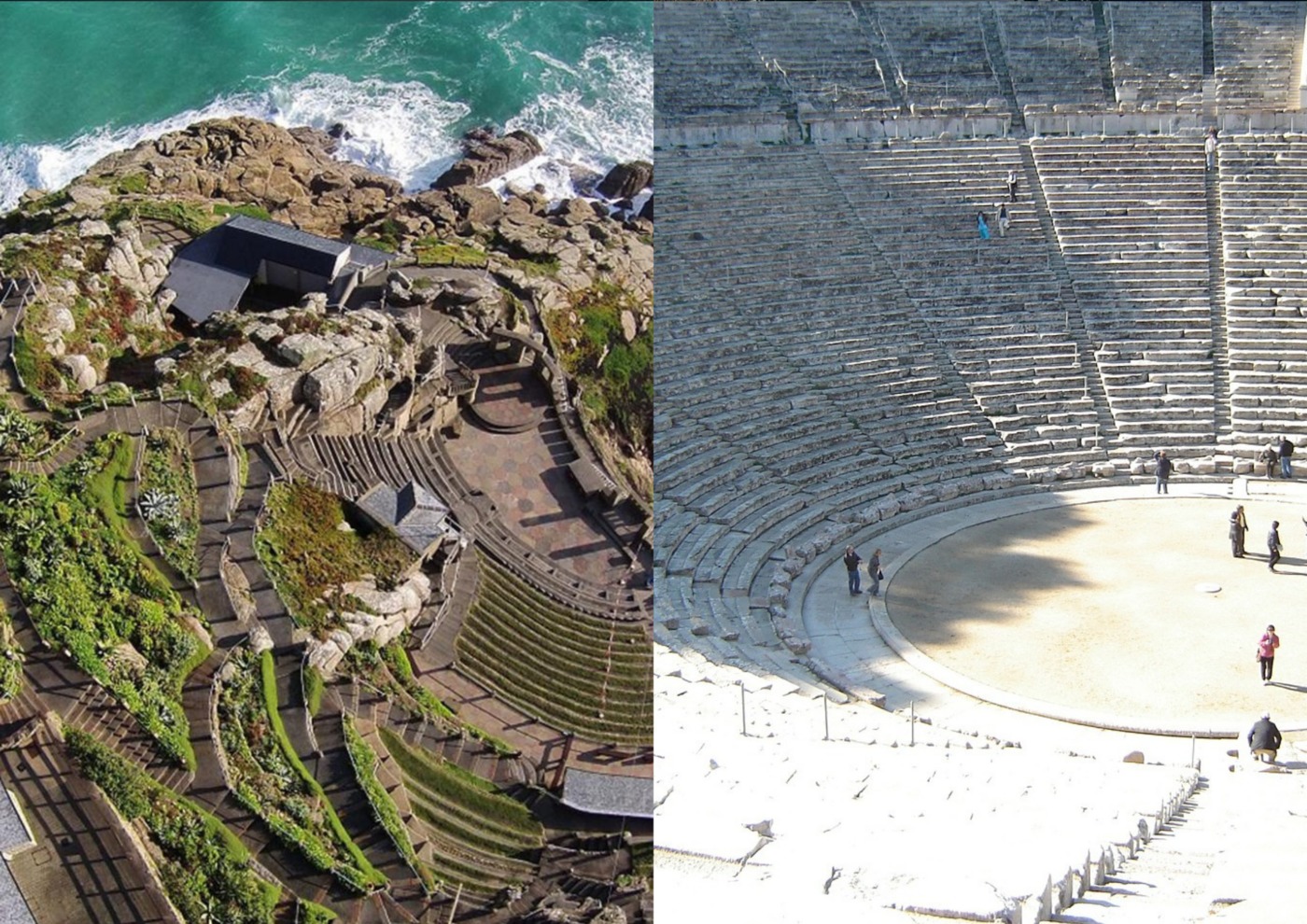 Grand in a way that only the ancient Greeks can do, the Ancient Theatre of Epidaurus is an architectural and cultural marvel. Built towards the end of the fourth century BC, it was designed by sculptor and architect Polykleitos the Younger and could seat 13,000 to 14,000 spectators. After a delicate restoration process throughout the twentieth century, the entire amphitheatre was recovered almost entirely in its original form, and hosts live performances to this day. From slightly more humble beginnings, is Cornwall’s Minack Theatre. Rowena Cade owned the land when she offered a company her cliff garden to perform The Tempest in 1932, seeing as it overlooked the sea. After the show’s success, she decided to construct proper seating and built it almost entirely by hand with her gardener and a friend, even carrying sacks of sand up from the beach for the concrete, and continued to work on it well into her eighties! Minack Theatre has repeatedly been named one of the world’s most spectacular theatres, and its season of performances runs from May to September each year, so be sure not to miss this incredible piece of Cornish history!

Instead of Corvin Castle, Transylvania 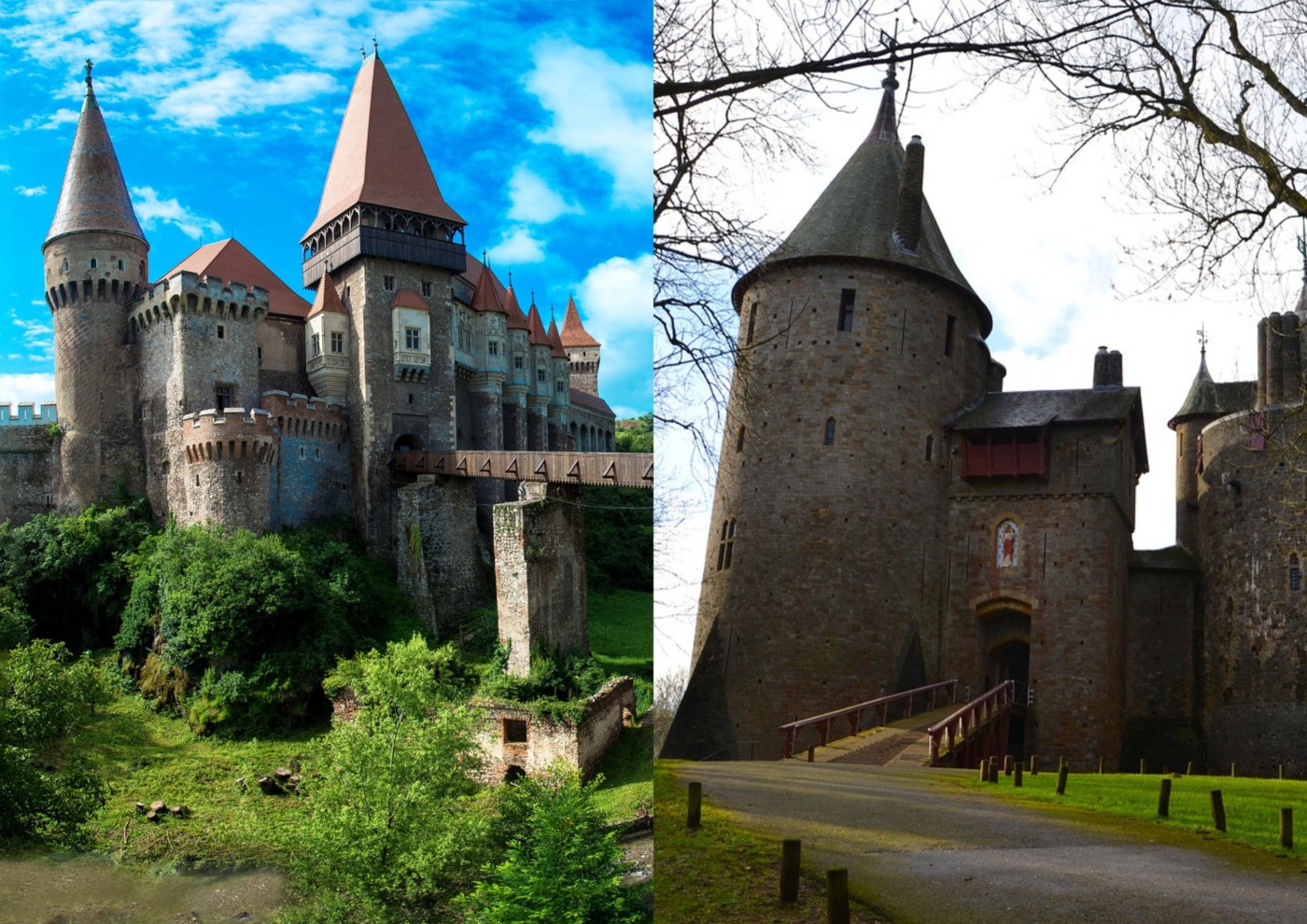 Corvin Castle, sometimes known as Hunyadi Castle, is one of Europe’s biggest castles; a feat of gothic-renaissance architecture, construction spanned many centuries to create how it stands today, as sections and towers were added as the need for more space and military defences increased. It is in one of the castle’s towers that Vlad the Impaler was held prisoner by John Hunyadi, before they formed a political alliance. John Hunyadi however, later killed Vlad the Impaler’s father, Vlad II Dracul, and so the castle has long been assumed as the inspiration for the title castle in Bram Stoker’s novel Dracula, although this has since been disproved! Castel Coch in Wales has a similar history to its construction; initial castles were built in the eleventh and thirteenth centuries but it wasn’t until the late nineteenth century that what currently stands was built to the designs of architect William Burges on top of the medieval remains. The gothic-inspired exterior and the victorian-gothic interiors are what has led to Castle Coch as being praised as "one of the greatest Victorian triumphs of architectural composition" by historian David McLees, and there is plenty more to discover about Cardiff’s fairytale castle if you fancy a visit!

Instead of Mont Saint Michel, Normandy 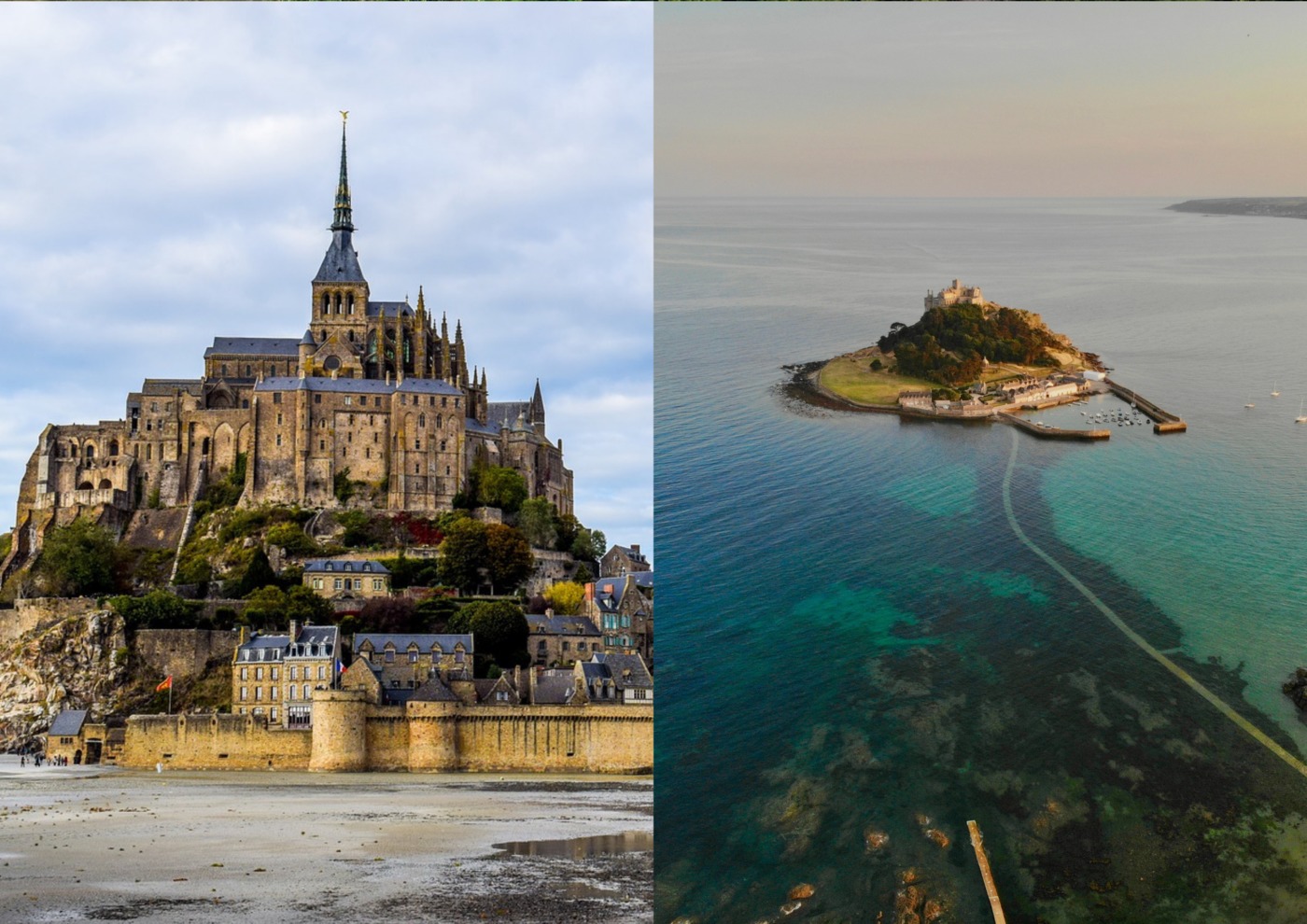 Once historic counterparts of one another, there is no surprise that St Michael’s Mount in the UK and Mont Saint Michel in France are somewhat twins. Both tidal islands, they can each be reached on foot via the mainland but only at low tide, for at high tide the pathways are submerged. This lack of constant access led to religious significance to be placed on each piece of land, and daily pilgrimages were made to the abbey on Mont Saint Michel in its earlier years of establishment. Its position and tidal island properties made it easily defensible, as the rising tide deterred any enemies, and drowned any that did attempt to cross over! Similar can be said for St Michael’s Mount in Cornwall, even though it is a quarter of the size of its French counterpart. The two were joined in the eleventh century when Edward the Confessor gave St Michael’s Mount to the Benedictine religious order of Mont Saint Michel. The pairing lasted roughly 400 years, and now the Cornish tidal island is the home of the St Aubyn family, and is open to visitors year round. Be sure to get tickets for the boat if you go at high tide!

Instead of Yosemite National Park, California 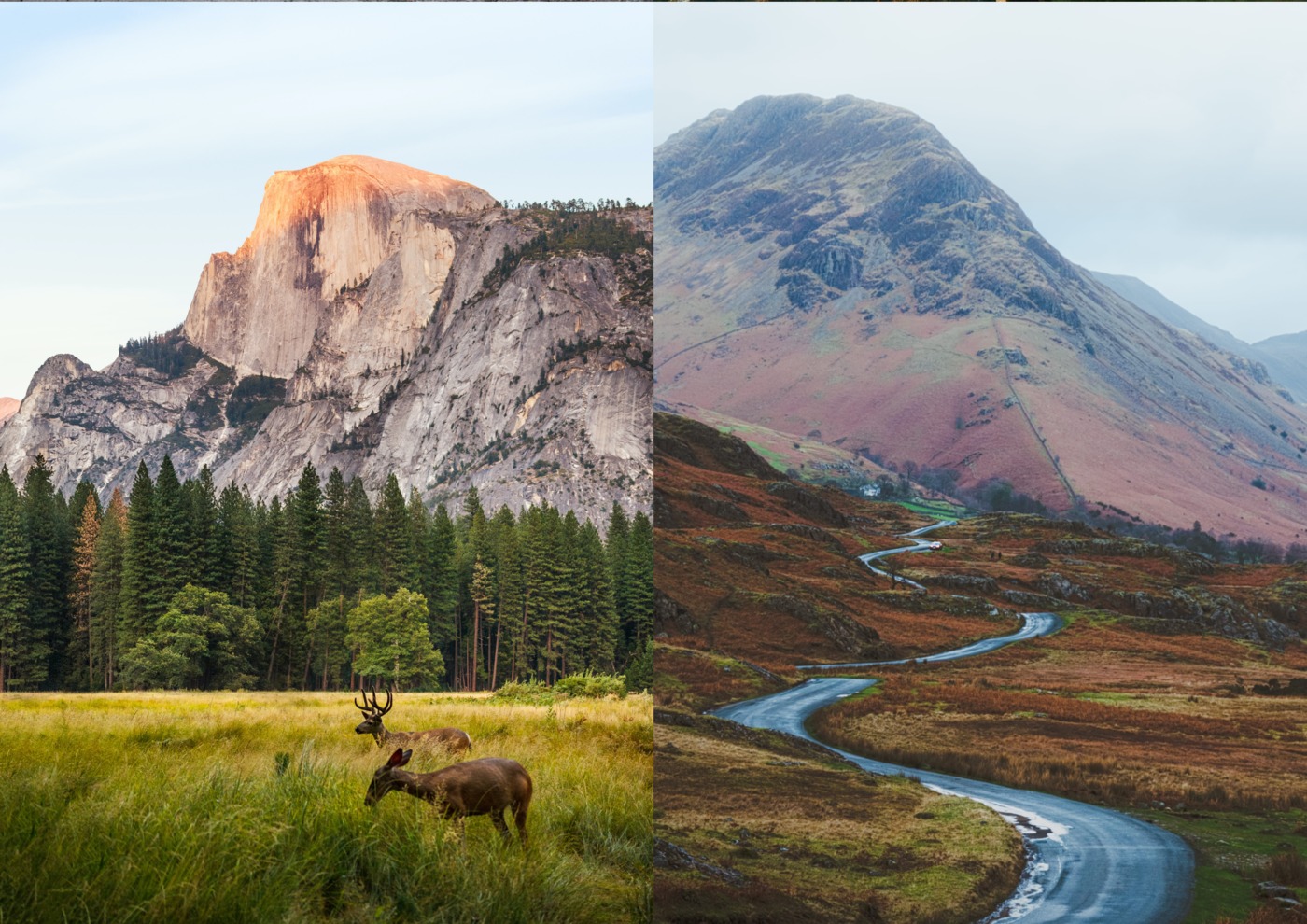 Yosemite National Park is known across the world as being one of the planet’s most stunning natural wonders, and is located in the Sierra Nevada of California. Covering an area of almost three quarters of a million acres, 95% of Yosemite National Park is preserved to maintain its natural wilderness and a huge range of diverse plants and animals are supported in their natural habitats. Yosemite is most often recognised for its massive granite cliffs, lakes, waterfalls, mountains and its thousands of trees and plant species, and of course for Yosemite Valley, a glacial valley regarded as the National Park’s centerpiece. Magnificent mountains and valleys are something the UK is also well known for, and the Wasdale Valley in the Lake District is no exception. Featuring Wastwater and Scafell Pike, England’s deepest lake and highest peak, Wasdale Valley is a destination for all adventure seekers and hiking lovers. Whether you want to get your climbing shoes on and try out the home base of British climbing, go for a walk with your pooch along the picturesque paths, hike up Pillar Trail for some mesmerising views, or soak up the sunshine by the water’s edge, Wasdale Valley is not to be missed.