Every hotel has a story… but some stories are just that little bit more special. This is one of them.

It all began in Java, in the year 1970, when a young medical student, Anhar Setjadibrata, took a job as a pharmaceutical rep. Waiting to complete the last year of his hospital internship, political discord suddenly put his course on hold, indefinitely. Anhar was not blessed with wealth, nor that of travel but his new position took him to places he’d never been before. Visiting the village doctors and nurses granted Anhar the opportunity to explore Bali, Nusa Tenggara, West Timor, Kalimantan and Borneo, as well as more of his native Java. During his trips he met many of the locals, and was surprised to find them casting out ‘worthless’ relics which they felt to be old-fashioned and out of style. Whilst also unaware of their monetary value, Anhar became enchanted by their beauty and the rich history of their land which they embodied, so began collecting them. 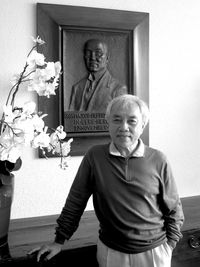 Working as a professional guide in his free time, the young scholar was hired by a European professor studying the legend of Ramayana – an ancient Sanskrit story which follows a prince’s quest to rescue his beloved wife from the clutches of a demon king. More than a tale of heroism; this legend symbolizes the fundamental ideals of the Hindu faith. The professor asked Anhar to accompany him to a secret meeting, situated near an old temple along a wide sandy beach. They waited patiently until twilight when a stranger approached with a curious object; a century stone bowl used by ancient priests to sprinkle holy water over the sick to cure them. This cultural treasure was known as a Cupa Manik, and despite being a novice collector, Anhar instinctively recognized its significance and was spellbound. Little did he know that one day this moment would lead him to become the largest collector of Indonesian Fine Art in the world. He was only 23 at the time.

Unable to practice medicine without taking his final exam, Anhar turned to law, opening his own practice in 1977. Twelve years later, however, Mr Setjadibrata accepted his true passion lay with his collection of antiquities, and felt compelled to share them with the world:

“I began to realize that my collections must no longer speak only to me, they must also speak to all of mankind as a symbol of my country’s rich history and cultural heritage.”

Quitting his law practice Anhar built his first boutique hotel in 1989, the Hotel Tugu Malang, where he was able to showcase these remarkable treasures. Today Tugu Malang is ranked among the 101 Best Hotels in the world, home to one of the largest collections of Javanese, Chinese and Dutch colonial antiques in Indonesia.

Following the success of the Tugu Malang, Mr Setjadibrata expanded his museum hotel concept opening up similar hotels in Bali, Lombok, and East Java. The word ‘Tugu’, means ‘monument’ and the mission of these hotels is simple - to bring art, culture and history of ancient Indonesia back to life. A stay at any one of these unique hotels is an extraordinary experience, transporting you back to a time of legends and romance. Just entering the Tugu Bali you’re immediately greeted by a giant Garuda bird carved out of a 120-year-old tree. This 18th century palace has been beautifully restored into a place of total wonder. Whether you’re staying at the floating villa, perched above a lotus pond, or enjoying a meal at the open air restaurant surrounded by some of Indonesia's most magnificent relics, a stay at The Tugu Bali is one you simply won’t forget; just as Anhar never forgot about that fortuitous night with the professor and the Cupu Manik. After years of collecting antiques and learning about their histories, Anhar finally located the coveted piece again. But this time, thanks to his success, he was able to acquire it, for himself. They say if you follow your passion then success is inevitable. In Anhar’s case, he was always destined to find it. And in doing so, discovered the true treasures of Indonesia. Now you can share them with him.